You are Here: Home » News » Deportation-threat couple are reunited 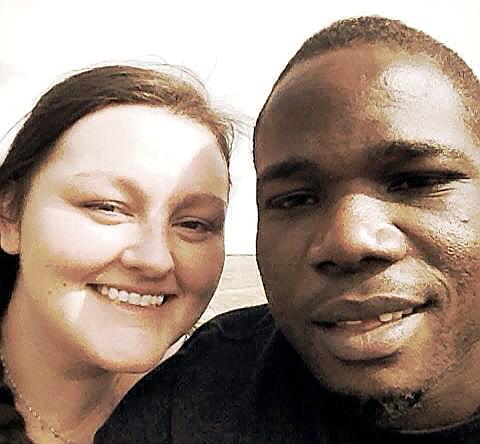 A FORMER member of the Nigerian Olympic boxing team who was locked up in an immigration detention centre, has been reunited with his heavily pregnant wife — but his fight to stay in the country continues.

After a terrifying experience “beyond words”, Victor Daodu (25) is now back at home in Oldham with his wife, Robyn who is seven months pregnant with his child.

On June 1 Victor was detained and taken to Dungavel immigration removal centre in South Lanarkshire, Scotland, without a word of warning — the second time this has happened.

However, with the help of Debbie Abrahams, MP for Oldham East and Saddleworth, Victor is now back with Robyn and has spoken of the misery he suffered.

Victor said: “It is beyond words. It was a combination of fear and tension.

“I began to question, am I not a fellow human being? Am I being judged because of my nationality?”

While in England for the 2012 Olympics Victor applied to join the British Army before returning to Nigeria in July after the games.

He was invited back for an interview on August 14, 2012, and after passing, he waited in the country nearly a year for his application to be processed.

But he was then told the law had changed and he was no longer eligible to join the Army.

However, he had already met and moved in with Robyn and on the assumption he would soon be joining the Army the couple had planned a future together.

After receiving permission from the Home Office, they married in April, 2014, but Victor has since been detained twice and is facing deportation despite Robyn being pregnant with his child.

He has had numerous applications for asylum rejected.

Victor added: “People have been commenting on our story, people who have been through the same thing.

“It’s not right what is happening, something needs to change. I just want to live a simple life as a human being. As a family we should be focusing on Robyn’s pregnancy, we need to be thinking about the baby but it’s hard.”

Robyn said: “If there’s any question of legitimacy over our relationship, they should come an see us at our home. We are in love with each other and it’s so obvious.

“Not once has anyone from the Home Office visited us at our home to do this. But we would welcome it because we have nothing to hide.”

Victor is now applying for leave to remain in the UK on the basis of his relationship with Robyn and his unborn child.

However, he has already had one application denied and Robyn says they fear this will happen again.

A letter from the Home Office said the couple should instead move to Nigeria but Robyn acts as a carer for her mother and father who are both registered disabled.

Mrs Abrahams said: “I’m glad to hear that Victor has been reunited with Robyn and we’ll continue to offer support as his leave to remain application is considered.”