You are Here: Home » News » Eyesore mill to be demolished

Eyesore mill to be demolished 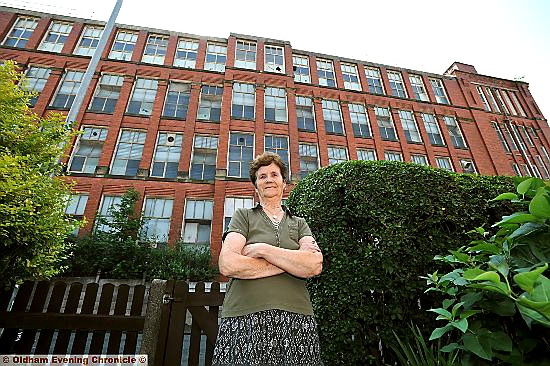 MIXED feelings: Jean Custy has lived opposite the mill for 35 years.

RELIEVED residents will be glad to see the back of an eyesore derelict mill - but don’t think housing is the best use for the site.

Grasscroft Property has purchased Durban Mill in Hollinwood and plans to build 80 homes as part of an £11 million development. The mill is the main view for residents of nearby Mafeking Street, and while a majority have welcomed the imminent demolition of the mill in September, they are concerned what impact 80 new homes will have on the area.

Jean Custy, who has lived on Mafeking Street for 35 years, said: “After living facing this mill for so many years I will be delighted to see the back of it. I would rather it be houses than this huge mill, but I think there are better things they could do with it. It’s an eyesore and I think most people will be happy to see it go.”

Nandhini Kuppuswamy, who has lived on the street for 10 years, said: “I’m very glad it’s going but not that it’s for housing. It would be great if the school got the land. They could put it to good use. More homes could cause problems with traffic and parking. That’s a concern.”

The mill was built in 1905 by Durban Mill Co and taken over by Lancashire Cotton Corporation in 1957. Production ceased in 1962, before Littlewoods used it from 1967 as a warehouse. The most recent user left in 2009.

Set behind Oasis Academy in Hollinwood, Grasscroft Property plans to develop the land for up to 80 two, three and four-bedroom homes.