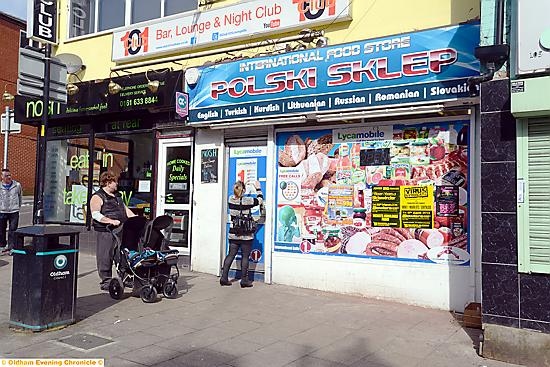 RAIDED . . . the Polish Food Store on Yorkshire Street was one of two shops targeted by police who uncovered stockpiles of illegal cigarettes and tobacco

The counterfeit cigarettes and tobacco were hidden behind false panels and flooring at the Polish Food Store on Yorkshire Street and Eastern Europe Food Store in Union Street.

The bogus items included Mayfair cigarettes and Golden Virginia rolling tobacco, and though much of the other stock was legitimate, it was produced outside the UK and broke consumer law by not bearing health warnings.

Leila Ghahhary, prosecuting, said the Polish Food Store was first raided on February 11, 2013, when illegal goods were seized. When the store was raided again the following day, it had already been re-stocked and counterfeit goods were again on sale. Another raid 12 months later found a different owner, but continuing sales of counterfeit products. A search at the Eastern Europe Store found similar products and hiding places.

The court was told 34-year old Jawadani and two other men had been involved in running the businesses, while a fourth had been employed at one of them. All four had come to the UK as asylum seekers. Jawadani — a family man with two young children — had at first owned leases on both shops, but now works part-time at a car wash.

Jawadani, of Edlingham, Rochdale; Soran Shapoli (32), of Flora Street, Oldham; and Rasul Ahmadi (40), now of Aysgarth Road, Batley; received four-month jail sentences suspended for 18 months, were ordered to do 120 hours of unpaid work and told to pay £2,000 each in costs.

The fourth man, 23-year old Bahman Zada of Goodrich Street, Rochdale, who the court was told was acting under instructions in selling counterfeit goods, was given 120 hours’ unpaid work and ordered to pay £1,000 in costs.

Sentencing them, Judge Timothy Mort told them: “It has been suggested that trading standards are not rigorously enforced in the countries from which you came, but you knew it was wrong to sell these goods, which is why you took so much trouble to hide them.”