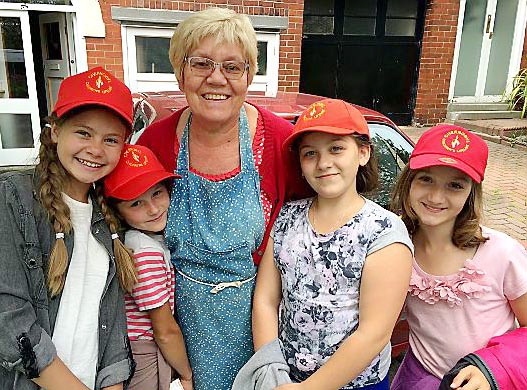 THIRTY years ago people went about their normal life in Belarus - little knowing that on April 6 a massive explosion would destroy the Chernobyl power station and unleash a local “nuclear winter” that continues to plague the region.

The blast spewed radioactive particles into the air, which spread over much of Western USSR and Europe. More than 230 people suffered acute radiation sickness and 31 of them died wihin three months.

Three decades later, the devastating cost to health is still being counted. One in five Belarussians lives on contaminated land and the number of cancers and genetic defects in the area around the reactor continues to rise.

It was reported that 95 per cent of children in the Chernobl area had at least one chronic illness, and the plight of these youngsters touched the heart of Royton’s Theresa Novotny and spurred her into action.

She spotted a short piece in this newspaper, inviting people to a meeting to work out ways they could help. Theresa though she and her husband might take a medical refugee for a short stay with them

“Instead I found myself forming a committee and raising £4,000 to bring the first group of 10 children to Oldham. That was a lot of money then and I never thought I could do it.”

The money started to mount up, and so the Oldham link of Chernobyl Children’s Lifeline was born.

That day resulted in a change of direction in life for Theresa, who has since worked tirelessly to help give more than 360 children from Belarus a much-needed holiday.

“It’s such a great pleasure to welcome the children. All of us, the fundraisers and host parents, receive as much back from them as we give.” she said.

It’s more than 20 years since Theresa travelled to Heathrow airport to meet her first group of visitors from Belarus.

“They just stood there, hardly moving,” she said. “Each with nothing other than what they stood in and a little black plastic bag containing a present for us. I just wasn’t prepared for the way they looked. They were very serious, very thin and very pale. Most of them couldn’t speak a word of English. They had obviously been told by their parents to be as good as gold. It just grabbed at my heart.”

As she watched personalities slowly bubble out as they gained confidence, the experience acted as the catalyst for Theresa’s unfaltering dedication to the charity.

She said: “I came to England from Austria in 1954. I was a small child in the war and we knew what it was like to go hungry and for life to be unstable.

“These children had been given a life sentence through no fault of their own. I felt I had an affinity with them. They enjoy what they see as a holiday and we try to give them as good a time as possible while they are here. We send them home with a new school uniform if we can - things are very expensive in Belarus and families struggle to provide.

“Volunteer hosts usualy workm so the children are taken on outings to the zoo or Wales, and so on. We have lots of volunteers and local charities helping to make their time in Oldham special.”

“A by-product is friendships between families here and in Belarus. It’s a great emotional boost for the children to have friends in Britain - friendships that last a very long time.”

Theresa keeps in touch with as many children as she can, and is known in Belarus as “babushka”, or grandmother: “I am an honorary grandmother and great-grandmother several times over!” she laughed.

The charity’s bottom line is to get the children away from the contamination for a short while: “It helps their immune system,” said Theresa, “and may help prevent them getting cancer or other conditions related to the nuclear fallout. You wouldn’t believe how fit they are after spending just four weeks in Oldham.

“Chernobyl was so long ago, people think it has all gone away, but it hasn’t. Nuclear fallout doesn’t go away in 30 years. It will take generations. Belarus is full of youngsters who suffer from a very early age. Thyroid cancer is most common, but they get all kinds of cancers.”

Theresa is still a leading light at the Oldham branch of the charity, and is chairman of the committee.

The children are accompanied by a teacher for their visit, and Theresa opens her home to the teachers during their stay.