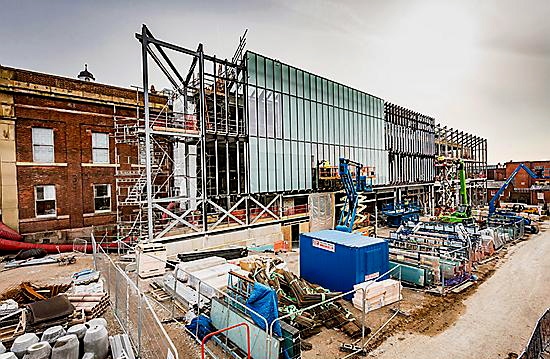 IMPRESSIVE development . . . the Clegg Street side showing the modern glazed light-box under construction

Oldham council is closing in on deals to bring two major restaurant chains into the Old Town Hall cinema and entertainment complex.

Officers have been talking to a range of potential operators about opening at the venue, which will transform the Grade II listed building into a multiplex Odeon cinema and seven family restaurants.

Today the council confirmed it has agreed provisional deals that would see Nandos and Gourmet Burger Kitchen joining Costa as the first tenants.

The restaurants will be part of the eagerly awaited development, which also includes an 800-seat, seven-screen cinema.

Jean Stretton, Oldham Council leader, said: “We’ve been having talks at a senior level with potential restaurant operators for several months and these are exciting times now for this development.

“We’ve always been very clear about the calibre and type of operator we wanted for the Old Town Hall.

This development will make a big statement about the new Oldham. It’s our flagship regeneration scheme and we only want great quality, popular, trusted and sought-after brands.”

Morgan Sindall, the developer’s main contractor, has been on-site working on the restoration of the Old Town Hall since October, 2013.

Work is set to be completed later this year.