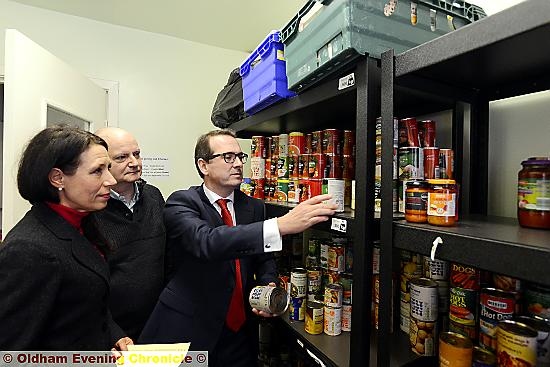 He called on the Government to halt the nationwide introduction of the new system following its three-year trial across the borough.

On his visit to Oldham Foodbank with Oldham East and Saddleworth MP Debbie Abrahams, Mr Smith met three Oldhamers who shared their experiences of life on the much-criticised benefit.

Mr Smith said: “It’s a good idea in principle, but the experiment in the North-West proves that the system isn’t yet fit for purpose. There are too many glitches, which often leave people necessarily or unduly sanctioned and without money.

“The reason we are here today is because the North-West is going to be harder hit than anywhere else in the country by the latest big cut to Universal Credit. Before today you were allowed to earn £1,300 a year before they started taking away Universal Credit; today that amount is zero.”

Claimants Anne-Marie Conway (26), Ryan Mathews (24) and Adam Miller (30) told the MPs they had all had benefits sanctioned - sometimes for up to a month - several times. All three said the system had failed to take their reasons for not meeting requirements into account. Mr Miller said often the response is “a stark computer says no”.

Mr Miller has just been sanctioned for failing to attend an appointment at Oldham Job Centre - because he was at a job interview. He told Job Centre staff in advance and had the absence approved. Another time he was sanctioned because he had broken his leg and couldn’t attend.

Ms Conway said a letter about an appointment was sent to her parents’ address - in Wales - but was still sanctioned for failing to attend even though she hadn’t received it. She suffers a curvature of the spine and can’t currently work.

But, she says, she was recently forced to do work experience in a charity shop and had to lift heavy sofas, but was too worried about sanctions to refuse.

Ms Conway and Mr Mathews — who has kidney problems — are in a relationship and receive a joint claim.

All three have had to rely on Oldham Foodbank because they had been penniless after sanctions.

Ms Conway said: “It is degrading, you don’t want to admit you’re in that state. It’s embarrassing.

“It’s already bad enough not being able to work. When you’re ill or you just can’t find a job you don’t want to be coming to places like the Foodbank but we’ve needed too.

“Because we have a joint claim, when one of us is sanctioned we’re both affected. We’ve worked very hard in the past and all we’re asking for is a bit of help back.

“It’s a good system, everything rolled into one, but the problem is staff. They’re not trained for it. You get passed from pillar to post and that’s how things get messed up.”

Shadow minister Mr Smith added: “Net, people are going to be £865 worse off this year than they were last year if they are in work and on Universal Credit and single.

“It’s a good idea to try to roll these benefits into one, and a good idea to design software that allows people’s circumstances to be factored in. The trouble is the system still doesn’t seem to be able to do that.

“It’s got to be incredibly flexible. From the examples we have heard here today, they should be pausing Universal Credit. “Its roll out should be stopped until they are absolutely clear it is going to work and be people-focused. It’s a bureaucratic system that’s treating people like numbers, failing to take into account individual circumstances.

“Oldham and the North-West has paid the price for being the experimental zone on Universal Credits.”

A DWP Spokesman said: "The truth is, Universal Credit is revolutionising welfare, with claimants moving into work faster and earning more than under the previous system.

“We are simplifying the work allowances under UC and giving people extra help to progress in work. This is alongside the increase in the National Living Wage and personal tax allowances which are helping to move us to a higher wage, lower tax, lower welfare society.”