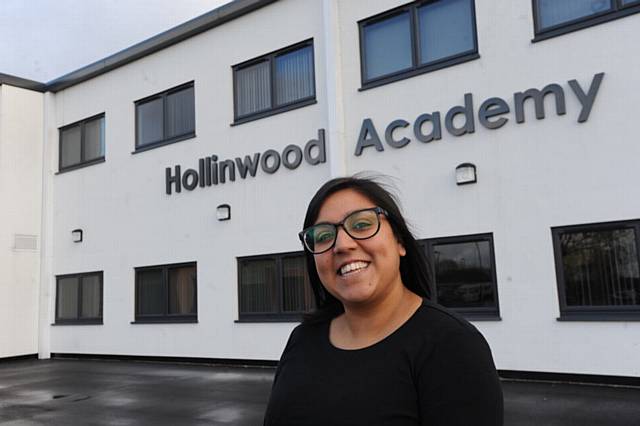 JAINA Mistry has been chosen as the second head of Oldham’s school for children with autism and social and communication difficulties which opened in September.

The 34-year-old will take over at the helm of the £6.25 million Hollinwood Academy from Sarah Lockwood.

Ms Lockwood took up the post in January 2015 ahead of the school’s opening. But she recently announced that she would step down in September to spend more time with her young daughter who has Down’s syndrome and autism.

She said that she would be leaving the school in “the best possible hands”.

Her successor is the Key Stage 2 co-ordinator at the Roman Road school which has 70 pupils in reception through to Year 10.

Miss Mistry, who lives is Derbyshire, praised the support of Miss Lockwood who encouraged her to apply for the post.

She said that her appointment would provide the continuity needed by pupils and added: “I am still in shock. I pushed myself for it and I wanted it for the children, the parents, the staff and the school.

“I plan to carry on the work that we started in September to create an environment for autistic children and children with social and communication difficulties which suits their needs and provides stability.”

Miss Mistry did a BTEC in childhood studies followed by a four-year teaching degree in literacy and numeracy with special educational needs at Manchester Metropolitan University.

She then worked at a large primary school in Didsbury for 10-and-a-half years where she progressed from a newly-qualified teacher to roles which included special educational needs co-ordinator and leadership positions.

“It was a massive change going from that period of time in a mainstream primary school to leading a team of teachers here in a specialist autistic setting,” said Miss Mistry, who also teaches English and maths at Hollinwood, as well as science at the neighbouring Newbridge Special School which is part of the same academy trust.

Outside of work Miss Mistry, who lives in Derbyshire, enjoys spending time with family and friends. And it is a busy time for her as she is also planning her wedding which takes place in August.

In a letter to parents, Ms Lockwood said: “I know that Jaina will be committed to moving the school forward and that her experience here places her in the optimum position to ensure continuity and stability for all.”