You are Here: Home » News » An inspiring town - despite the odds

An inspiring town - despite the odds 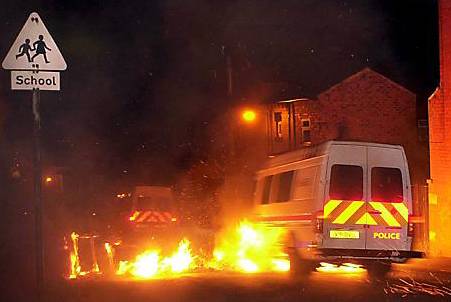 WE ARE proud of Oldham and all of our diverse communities. We are inspired by the prospect of a positive future but we are honest about the challenges our town faces too.

The town hit the national headlines for all the wrong reasons and while the images were shocking no-one could honestly say it came as a total surprise.

Underlying tensions that had been simmering for over a decade conspired with a series of events that culminated in horrific scenes of burning cars, vandalism and violence.

The riots led to a fundamental review of a range of issues from community relations, education, skills and employment, housing and the role of community leaders and public services.

A series of deep, searching and often difficult discussions took place, many of which were the focus of two significant reports that followed by Cantle and Richie.

Both highlighted underlying stresses. But worryingly, the conclusion reached wasn't a community coming to terms with change.

It was two very different communities living totally separate lives with little interaction, understanding of each other or desire to come together and live harmoniously.

The reports also bore a clear warning - unless something significantly changed, the growing Asian population coupled with 'white flight' would see the problem worsen not improve.

We approach community cohesion, culture and religion and how communities choose or are forced to live in a particular way with great caution.

That's not because we are fearful of tackling the difficult issues that definitely should be challenged. It's more the fear of over-simplifying complex issues or generalising whole communities and losing goodwill.

For change to happen it must be owned by everyone in Oldham, not just a few.

There was a real focus around creating opportunities for mixed communities and housing and education were seen as vital components of that.

It is natural for new arrivals to want to settle within familiar and supportive communities where they would have the support of family, be surrounded by people who spoke the language of home and had places to worship, shop and socialise.

Reports at the time recognised that while this was inevitable, it was a significant barrier to achieving mixed communities and this was compounded by a white community that increasing felt the community infrastructure they needed to feel at home was disappearing.

The answer for much of the white community was to move out to the suburbs.

The Housing Market Renewal and the Gateways to Oldham programmes - intended to replace low demand, substandard terrace rows with better quality properties for mixed communities - were hit by an entrenched population with strong 'micro housing markets' and the failure of the then Coalition Government to see it through.

Though the local council has done a great deal to kick-start development, there is little doubt that the programmes didn't have the scale to see fundamental community change as the government walked away and left large areas of land derelict and even less desirable.

Oldham still has many of the same issues - but it is not the same place as in 2001.

A growing educated and middle-class Asian community is realising the rebirth of Coppice and Werneth as decent and attractive places to live.

While much of the focus has been about racial divide, we find it gives great hope that those who do well decide to stay and invest in Oldham.

Although there is much to celebrate about how Oldham has risen to the challenge following the riots, there are still persistent inequalities across the borough. Not only is this unfair and a waste of human potential, but it threatens the social cohesion we are trying to foster. Fundamentally, these inequalities are not fixed or inevitable.

There is no law of nature that decrees that the children of poor families should die at twice the rate of children born into rich families.

The Oldham Fairness Commission (OFC) was set up in 2013 to look specifically at inequalities in education, employment and income, and to define action to address these issues through local partners and beyond.

In March, 2015, the final OFC report was published and local commissioners from across public, private and voluntary sectors accepted the challenge to work together to build a fairer Oldham. We know that fairer and more equal societies benefit all of us and we are doing our bit in Oldham.

A great deal of hope was put into the education system with a strong belief that young people from different communities could be brought together in high performing and desirable schools.

Much work and a great deal of money was spent on the rebuilding and relocation of schools.

Christian faith schools were encouraged to open up admission to include those of other religions and a brave decision was taken to merge two schools - one predominately white and the other predominately Asian - to create a mixed school. This was in addition to other mergers and serious investment in better quality schools.

Ambitious plans to modernise the education system were dealt a hard blow when the government announced they were no longer prepared to fund new secondary school buildings at Hathershaw and Royton and Crompton, nor the new college campus which had taken years to develop and would have created a first-class facility for aspiring young people.

Cruelly, money that could have been spent to benefit thousands was directed to government priorities, including the establishment of a university technical college and a free school - both government dictats as our existing schools stood needing millions of pounds of maintenance and improvement work.

There was also a great deal of effort put into schools from different communities joining forces so that pupils could meet young people from other backgrounds.

The ability of everyone in the community to hold the same values and to speak the same language was, rightly, seen as the foundation of a strong and accepting town.

We must accept that there are still significant issues with many not having a strong command of English.

This presents a barrier - both to being able to engage with the wider community but also reinforcing the notion that we live the parallel lives referred to in earlier reviews.

The Education and Skills Commission provides a clear vision to come together to improve outcomes for our young people but we need the government to work with us.

Government cuts to English language courses will have a direct and damaging effect on the ability for non-English speaking new arrivals to fully participate in wider community life.

If not for the work of local schools, colleges and community groups as well as the 'Outstanding' rated Lifelong Learning team of the local council it would be much worse.

The government's immigration restrictions are challenging the culture and tradition of marrying from abroad and that may offer a period of settlement to build from, but that in itself creates tensions with the new arrivals from Eastern Europe who themselves are following the pattern of settlement seen by previous generations.

We take the simplistic view that if someone is making the life-changing decision to move to Britain with their family then that drive and determination should be captured to welcome them to a broader community.

We must have the confidence to uphold commonly-held values, particularly with women's equality.

Though some small progress has been made on giving a voice to women and working to greater women representation we are a long way from seeing real change.

For the council to be a creditable leader, it must look and feel like the community it is there to serve.

But the tensions are real. And as highlighted in earlier reports, some very basic but symbolic things make a big difference.

Fifteen years ago the poor quality of environment affected both the quality of life of those who lived in those areas but also the perception of the whole community.

With cuts to council budgets, it is noticeable that many areas in Oldham fail to meet basic standards of cleanliness most people would demand for their own area.

While it is true to say that the majority of tipping and littering will almost certainly come from local residents, it must be accepted that most people are decent and respectful yet have to live with the consequences of the actions of others.

With limited resources, the council is working to balance education and targeted enforcement with the constant need to clean up but it is a constant battle.

The problem is compounded by the vast number of private landlords who take rent for poor-quality housing and tenants who move as soon as they are able to.

This high turnover of residents means that not only do tenants have little investment in the area but some landlords think nothing of dumping the remnants of the last tenant out in the back alleyway.

The Private Landlord Licensing Scheme will go some way to addressing this but it is critical that neighbourhood management plans are put in place.

The council is showing leadership and the recent prosecution of four private landlords should send a message.

The focus of local leaders was to put a long-term plan in place to create a town people would be proud to call home.

In the face of ever-decreasing budgets and a government that seem to have given up on towns like Oldham, it is impressive and inspiring to see the town standing tall and setting out a vision for the future.

Oldham is a long way from being fixed, but the focus on creating a decent town centre for all communities in Oldham to share, enjoy and to socialise together is important.

The Old Town Hall cinema and restaurant complex will not only provide a fantastic family venue, it will become a symbol of the new Oldham.

The same is true of new housing which is of high quality and designed to appeal to the aspirational.

With new leisure centres, shops, bars (both wine and milkshake) and an emerging independent quarter bridging the town centre with a new £60m retail and residential scheme at Princes Gate there is a lot to be hopeful about.

But is it not right for the government to constantly undermine these efforts through indifference and through actively chipping away at the foundations a new Oldham will be built on.

With the other members of parliament - and working alongside the local council - we are determined not to have our town's history written for us. We want Oldham to be known as an inspiring town that - despite all the odds - came out fighting and won.