You are Here: Home » News » Landlord remembers a legend 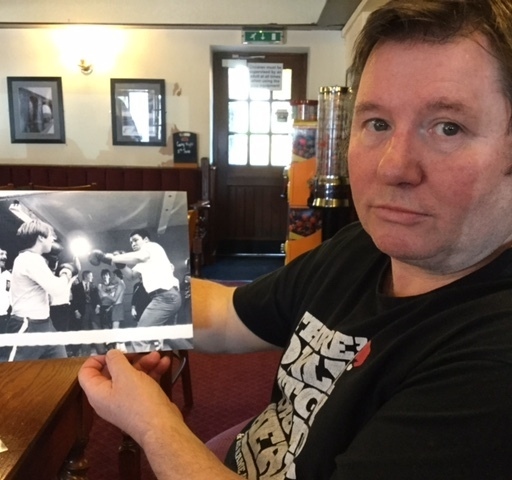 LES Close and the photo of him taking a surprise swing at iconic Muhammad Ali.

A SPRINGHEAD pub landlord talked affectionately of the day he landed a left-hander on the jaw of the worlds most famous boxer.

Les Close took a surprise swing at iconic Muhammad Ali when the champ visited Newcastle on a whistle stop tour of the north east in 1977.

Speaking from the bar of The Peels Arms in Den Lane, Les, (58) who has been mine host for 16 years, said: "I broke down and cried when I heard the news Muhammad had died.

"He was a truly remarkable person. Kind, generous hearted and magnetic. I can't believe he's gone. But he'll never be forgotten."

Les' amazing encounter with the boxer came when he was invited to be part of a lineup of local boxing talent who greeted Ali when he visited Grainger Park Boxing Club at Scotswood, Newcastle.

He recalls: "We were all very excited and when Muhammad gripped my right hand in greeting he asked me if I'd got fire in my belly.

"I couldn't resist so I took a jab at him with my left hand.

"He looked really surprised but he smiled, took it in good part."

And Les' dream came true when Ali invited him into the ring for a five-minute sparring session in front of a crowd of his peers.

"It was all a bit of a dream really," said Les. "I was wearing a shirt and tracksuit bottoms but I really wanted to show Ali what I could do.

"But his reach was totally amazing. It was as if he had extensions to his arms.

"I couldn't get near him with him being a lot taller than me so I tucked in and tried to get beneath his guard. The crowd were shouting at me to calm down.

"But then Ali went into his famous shuffle. I was completely mesmerised. He was undoubtedly the best boxer the world has ever seen.

"I still pinch myself when I look at the pictures taken at the time. It's just unbelievable a lad from the Newbiggin Hall estate could be in the ring with this boxing legend."

Les, married to Pauline with a son who is an airline pilot, has coveted, framed pictures of Ali on the walls of his little pub - treasured mementos of their memorable meeting.

"I'm planning to send a tribute to his family in America," Les declared.

"It's just so heartbreaking the world has lost one of the greatest sporting legends."

Debbie Abrahams MP tweeted: "Very sad news about legendary boxer #MuhammadAli - Rest in peace" alongside a picture of the boxer with his quote: "It is a lack of faith that makes people afraid of meeting challenges and I believed in myself."

Prime Minister David Cameron said: "Muhammad Ali was not just a champion in the ring - he was a champion of civil rights, and a role model for so many people."