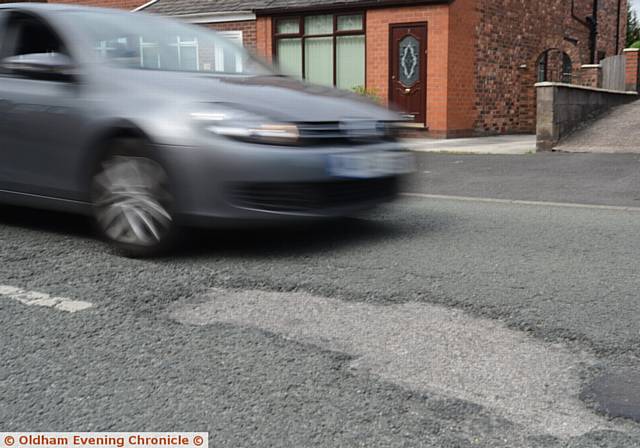 HOLE lot of trouble . . . these potholes on Lord Lane, Failsworth, helped make the borough the most complained about town for road repairs in Greater Manchester

IF complaints are anything to go by, Oldham could be home to the highways from hell.

The borough has been recognised as having the highest number of requests for surface and pothole repairs than any other authority in Greater Manchester.

A study by the Federation of Small Businesses into the state of the region's roads in 2014/15 unearthed the shock figures which were well above those of neighbouring Rochdale and Tameside and higher than Stockport, Bury, Bolton, Trafford and Salford, although there were no figures available from Manchester City Council for the same period.

Responding to the FSB's Freedom of Information requests, Oldham reported receiving 3,594 requests asking for road damage to be repaired, 806 more than the previous year.

The research also showed the authority spent over £2.3m less ­- not including labour costs­ - on repairing roads than it did in 2013/14.

Lord Lane, in Failsworth, was revealed to be Oldham's most complained about road in both 2013/14 and 2014/15 but a spokesman for Oldham Council said it had since been resurfaced.

Robert Downes, development manager for the Manchester and North Cheshire

Federation of Small Businesses, said: "The results for Oldham are frankly disappointing. Complaints are up significantly on the previous year ­- and yet spend on repairs is down.

"It's also the highest figure recorded by any council in Greater Manchester, making Oldham the region's pothole capital ­- and it's no laughing matter.

"The state of Oldham's roads are clearly a serious local issue the authority needs to address.

"Businesses pay a lot of money in rates and expect the basics like roads to be maintained to a decent standard.

"I suspect many business owners in Oldham will believe they are not getting value for money. Most businesses rely in some way on roads to trade successfully, whether it's for their staff to get in to work on time, or customers to come and spend with them.

"Having to navigate an unsightly minefield of potholes which can damage cars and also be hazardous for pedestrians doesn't help, and can make an area look unkempt. It certainly won't help attract new business."

Councillor Fida Hussain, Cabinet member for environment services, said road repairs are a priority but geographically the borough has a constant battle against the elements.

"We actively encourage residents to report potholes ­- this helps us keep on top of the issue. We are happy that our residents are engaging with us.

"Oldham Council has invested £12million in the highways department to tackle potholes across the borough.

"We repair around 15,000 potholes a year and deliver a 24-hour repair promise on the borough's priority roads.

"We have a fantastic team of trained, dedicated staff working on our roads. Our machines are innovative and make work quicker and cheaper, meaning they offer good value for money and cause less disruption to motorists.

"But we have 507 miles of roads to monitor and our location, high on the Pennine plateau, means our roads are more susceptible to cold and wet weather damage than other boroughs. So, naturally, potholes will appear.

"Highway maintenance is a nationwide issue and we know Oldham residents identify it as a priority and so do we.

"Our officers work very hard to ensure our roads are safe."

The research showed generally that roads in Greater Manchester are slowly improving but underlined how it continues to be a postcode lottery from borough to borough as to levels of investment by councils.