You are Here: Home » News » Window into their world dementia

Window into their world dementia 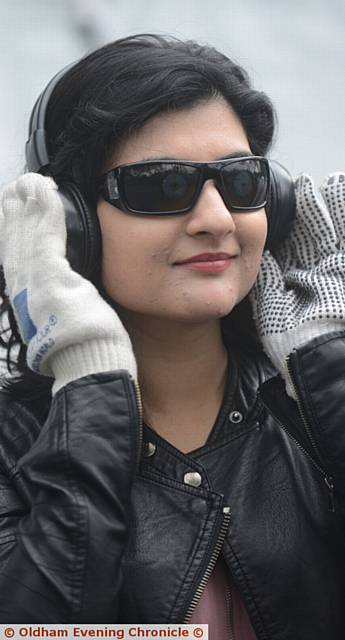 I JUMPED when I heard the loud siren and immediately put my hands over my ears, willing it to stop . . . then the siren faded - only for the sound of the endless static to return.

All I could see were dark outlines with flashes of strobe lighting. With the pain in my feet and not being able to see or hear much, I slumped on to the sofa behind me and stayed still.

I really had stepped into the shoes of someone living with dementia. I was invited by Training 2 Care UK Ltd to take part in a Virtual Dementia Tour. The mobile simulator has been touring the country in an attempt to change people's perceptions of the condition.

PK Beville, founder of the international non-profit organisation Second Wind Dreams, designed the simulator in 2001, with the hope that the public could experience the difficulties of living with dementia.

I was part of a group of four who would be the first ones to try out the experience that day at a mobile home stationed in the car park of Saddleworth Leisure Centre in Uppermill.

With large headphones covering my ears, blasting out all kinds of noises ­- from sirens to alarm clocks and sunglasses with the central vision distorted, it was a hard-hitting experience.

I had to insert spiky insoles in my shoes, so that the weight of my body would press my feet right down on to the hard surface, and then put on gardening gloves to numb the sensation in my hands.

We were then ushered into the next room, where I could see nothing but flashing lights and blurred outlines of other people.

The tour lasted eight minutes but felt like much longer. I was given instructions by a large shadowy figure ­- why had he not introduced himself to us? But I could not hear anything.

It was only when he leaned in and touched my arm that I was able to hear what he was telling me. "Find something useful to do," he said. But what did that mean, I wondered.

With the insoles hurting my feet and not being able to see much, the only "useful" thing I could do was sit down and keep out of everyone's way.

Also taking part in the tour was Debbie Abrahams, MP for Oldham East and Saddleworth, who has been working to make Oldham a dementia-friendly borough.

As our group had finished first, we were able to see how Mrs Abraham's group would behave.

In contrast to our quiet group, theirs was a lot more talkative and seemed to cope much better once they had identified a friendly face ­- something for care providers to take note of, we were told after.

Mrs Abrahams, co-chair of the All-Party Parliamentary Group on Dementia, said: "I started to get really upset. My mum lived with dementia ­- that's how I first became aware of it. That's why I started the Dementia Friends Oldham initiative.

"Having looked after my mum I picked up the things that she was experiencing. It explained more about what she was going through ­- it made sense.

Joyce Brown is a Dementia Friends Champion and a volunteer for the Alzheimer's Society. Although she helped organise the tour she had to experience it for herself.

It was fascinating to see her transform from being calm and collected to quite helpless. Throughout the tour, her breathing became shallow and she repeated that she wanted to leave.

Joyce, who was part of Mrs Abrahams' group, said: "It was completely disorienting because of all the lights and the fact that I couldn't hear or see properly.

"I was panicky. I knew it was only eight minutes. I was very tempted at one point to take off the glasses and ear muffs.

"I thought I knew a lot but once I had that experience that will stick with me a lot more."

Frank Boocock (82), from Lydgate, took part to better understand his brother-in-law, who has dementia. "You would go mad if you had to experience that all day," said Frank.

"I was thinking, 'I will be glad when this is all over'.

"He gave us instructions - I hadn't a clue what he was on about. I was given two further instructions that I couldn't carry out.

"I thought the best thing was to sit down and stay out of everyone's way.

"There was continuous noise and lights. You would feel enclosed. It was more than an alien world - you feel completely cut off from everything.

"My brother-in-law has dementia and it's getting worse. He walked in front of a bus and he had no idea what he had done.

"This gives me a better understanding of what he's going through."

When all the groups had completed the tour we were given a debriefing from Glenn Knight, managing director of Training 2 Care.

As the only UK partner and licence holder of the VDT the organisation aims to improve the quality of care given by people working within the sector. "Dementia is a pathway," said Glenn. "It's the eighth biggest killer in this country.

"It's killed more females in England than breast cancer; 7.7million people are diagnosed with dementia worldwide."

Here are some tips that Glenn gave us:

• If someone has dementia, never approach them from behind or the side. This is due to macular degeneration, a medical condition which may result in blurred or no vision. Always approach them with a smile on your face and introduce yourself as they may not remember who you are.

• Comfortable insoles in the shoes can make a huge difference and will allow them to be more mobile. The nerves in their hands and feet will be damaged, due to to peripheral neuropathy.

• Those who live with dementia will have a heightened sense of hearing. They are not deaf, so do not shout. Instead, touch them lightly on the arm if you want them to listen and they will focus on what you are saying.

• Most of the time swearing, or any form of aggression, is a cry for help. Look around to see what is causing them distress.

"People with dementia are still people.

"They have got a degenerative disease ­­- we have to understand from their point of view and get a window into their world."

For more information on the VDT, visit www.training2care.co.uk.