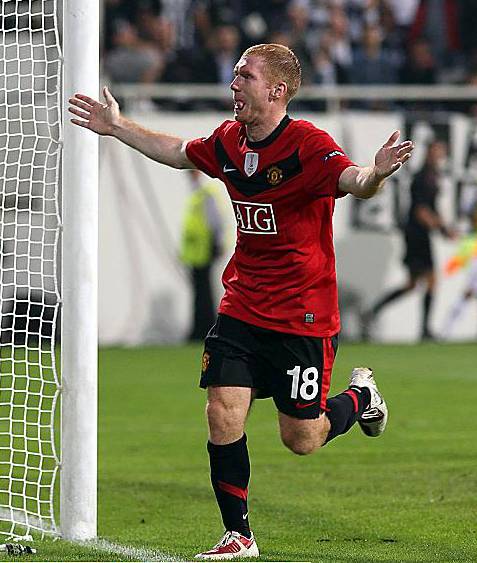 MANCHESTER United star Paul Scholes turned down the chance to come out of international retirement to play in this summer’s World Cup in South Africa. Picture: Nick Potts/PA Wire.

PAUL Scholes has admitted he could have been lining up for England in the World Cup — if he was asked earlier.

The Italian asked the life-long Athletic fan to make himself available for selection for this summer’s tournament in South Africa but the request was politely rejected.

Talking exclusively to the Chronicle, Scholes (35) said: “It’s a big decision and I wasn’t really given enough time to think about it, so I decided not to take up the offer.

“If they’d asked me earlier I probably would have accepted.

“There are players in the squad who have spent nearly two years flying all around the world helping England qualify for the World Cup, whereas I haven’t been involved for a long time.

“It wasn’t a case of wanting to go on holiday, it was the fact that I got the call so close to the tournament, and also I didn’t want to take the place of someone who helped get England to South Africa.

“The idea just didn’t sit comfortably with me.”

Scholes, a one club man, has made more than 600 appearances for the Red Devils.

He represented his country with distinction between 1997 and 2004, participating in two World Cups and two European Championships.

Scholes announced his retirement from international football in August 2004, stating his desire to prolong his club career and spend more time with his family.

But he was also known to be unhappy at being played out of position by Sven-Goran Eriksson.

He watched on in despair at reports of his United team-mate Rio Ferdinand being ruled out of the competition with a knee injury.

“I really feel for Rio, especially getting hurt so close to the start of the action,” said Scholes, who was speaking at the opening of Chadderton Park FC’s new changing rooms (see Page 5).

“It’s not just sad for Rio but for England as well, because he is captain and an important figure.”