You are Here: Home » News » My Boro dream - Ripley 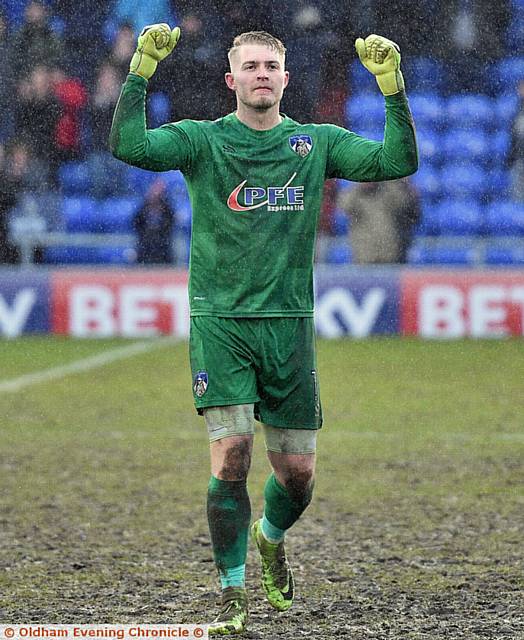 CONNOR RIPLEY . . . recorded more clean sheets than any other goalkeeper in Sky Bet League One

ATHLETIC'S star goalkeeper Connor Ripley wants to fulfil a childhood dream by nailing down a first-team role at Middlesbrough next season.

The stand-out shot-stopper in the whole of Sky Bet League One kept more clean sheets (18) this season than any rival in the division.

His season-long loan up, Ripley will return in the summer to a Boro club seemingly destined for the Championship.

Six points adrift of safety with only three Premier League fixtures left, Steve Agnew's side could be relegated if they lose at Chelsea next Monday.

Former Barcelona goalkeeper Victor Valdes is unlikely to want to stay if Boro are relegated and current stand-in Brad Guzan is leaving for Atlanta.

With goalkeeping coach Leo Percovich keeping close tabs on Ripley's progress with Athletic, which follows on from a season's loan at Motherwell last term, the 24-year-old could end up between the posts as Boro try to make it back to the top flight at the first time of asking.

"At the end of the day, I have another year left on my contract at Middlesbrough," Ripley told the Chronicle.

"I personally do want to be at Middlesbrough. I want to be playing there, at the club I have supported since I was a kid.

"But ultimately, it is not up to me. If they don't think I am ready, then I will probably go back out on loan.

"There is talk about me staying at Middlesbrough and what will happen if they go down to the Championship. We will have to just wait and see."

With a return to Athletic highly unlikely by the club's own admission, filling the vacant number one spot for next season will be a major priority for manager John Sheridan, who is primed to unveil the club's retained list.

Ripley feels that with the players currently confirmed as staying, quality additions could potentially see the club emulate another of the division's lesser lights.

Fleetwood Town finished in 19th place last season, but this time around only missed out on automatic promotion on the last day with a play-off semi-final first leg at Bradford City tomorrow to look forward to.

"I think they have a great base here," Ripley said.

"The gaffer they have got is one of the best I have ever worked with and Clarkey as a captain is great. He's a really good friend too.

"Build on that and I would like to think they can get to the play-offs. You only have to look at Fleetwood, who were nearly promoted automatically, to see what is possible."