You are Here: Home » News » Conn-ed out of the cup

Conn-ed out of the cup 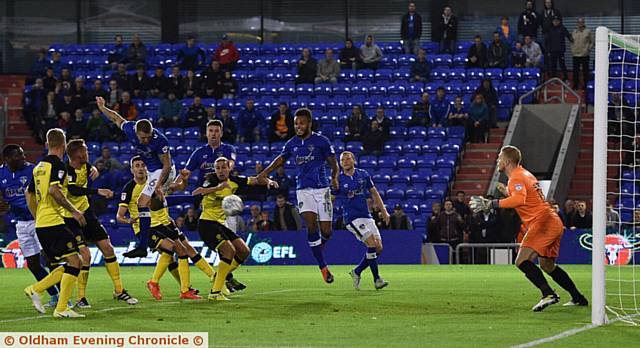 CONNOR Ripley em-erged with a smile after again becoming the centre of attention for Athletic supporters.

In the end, the former favourite got away with a Carabao Cup first-round win on his Burton debut, despite throwing an error in with a couple of very sharp reaction stops - including one right at the end when Peter Clarke's header was somehow shovelled against a post and away to safety via his own defender Kyle McFadzean.

And there was also the small matter of Aaron Amadi-Holloway's first-half header striking an upright after beating the on-loan Boro shot-stopper's dive.

All five goals here came in the second half.

Paul Green's free-kick from deep eluded Ripley as Clarke crossed his path, for a goal Athletic's veteran midfielder didn't have the heart to properly celebrate.

That came after Luke Varney had made the most of a horrible Ousmane Fane back-pass to open the scoring on 47 minutes, a goal that prompted a comeback from Athletic that produced Green's goal and a penalty from substitute Craig Davies.

Matt Lund levelled and in the 86th minute, the Brewers were back in front decisively when Lucas Akins slotted in from the penalty spot.

Right at the death, Clarke's scuffed header almost took the tie to extra-time.

Burton boss Nigel Clough made eight changes to his side that lost 1-0 to Cardiff on the opening day of the Championship season - including a call-up for Matt Palmer and a highly ironic debut for Ripley.

Sheridan's selection was by contrast conservative. Courtney Duffus stepped into the striking spot left by Davies, who took a place on the bench, while Cameron Dummigan's station on the right of midfield saw Green pushed infield in a traditional 4-4-2 formation and Ollie Banks taking a breather as substitute.

Athletic's start was disjointed and in the chasm that separated midfield from the front two of Duffus and Amadi-Holloway, Palmer was afforded a huge amount of space to dictate terms with his intelligent movement and passing from a station in front of the Brewers' back four.

Varney and Hope Akpan both forced decent reaction saves from Ben Wilson before Sheridan - not shy about telling his players to shape up from the technical area - gave Duffus a brief to stand on Palmer's toes when Athletic were out of possession.

The hosts, up to then uninspired and poor from set pieces, upped their game and finished the opening half the stronger.

Amadi-Holloway in particular burst into life after seeing the level of service to him improve.

One counter-attack charge and neat pass from Ryan McLaughlin on 35 minutes ended with Amadi-Holloway hammering a shot that Ripley did very well to leap to his left and palm behind. Two minutes later, Anthony Gerrard shaped a left-footed cross in that Amadi-Holloway extended his neck muscles to land a firm contact on, the ball looping over the left arm of Ripley and rebounding off the far post.

Athletic will have been told to start the second half in the same vein they ended the first. Instead, they shot themselves in the foot just two minutes in.

McLaughlin had made a typically energetic burst forward and as the ball was spread from right to left, Fane opted for a safe option of looking back rather than forward from just in front of halfway. Only, his back-pass had only half the pace on that was needed to reach Ben Wilson and Varney was alert enough to intercept and slot into an empty goal.

The lead lasted all of seven minutes. McLaughlin, who caused problems with his direct running, drew a free-kick of the left, 30 yards from goal. Green whipped in an excellent delivery, right to the edge of the six-yard box where Clarke lurked. Ripley came for it but both big men failed to make any connection and the ball nestled in the corner.

Craig Davies came on for Duffus, who struggled to get into the game, as Athletic tried to build on the equaliser. And he was soon stepping up to take a penalty. Again it was McLaughlin who caused the issue for Clough's side, bursting into the penalty area and drawing a panicky foul from debutant Ben Fox, who shunted the winger to the floor. Davies sent Ripley the wrong way from the spot.

But Athletic failed to sit on that lead for long - all of two minutes, in fact. Matt Lund - once on loan here from Stoke back in Paul Dickov's days in charge - arrived into the penalty area late to stroke home a low cross from the right flank by Joe Sbarra, sending the ball to the left of Wilson in the home goal.

Athletic then found themselves penned in as Burton established some control on proceedings, albeit without really threatening Wilson's goal.

That is, until Damien McCrory's bursting run from deep blind-sided McLaughlin. Whether there was much contact as he went to ground just inside the area is debatable, but referee Scott Duncan pointed to the spot to allow Akins to settle the tie.

There was a bright spot for the hosts through an added-time debut for youth-team product Mason Fawns, before Clarke so nearly took an exciting tie into extra-time.