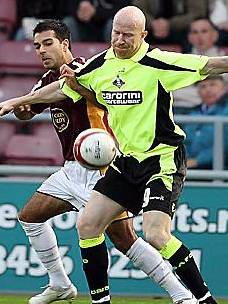 AMBITIOUS Athletic have offered Lee Hughes a new two-year contract in a bid to keep their star striker at Boundary Park.

And the owners have revealed the deal would make the 32-year-old the highest-paid player at the club.

Hughes, whose 13 goals have helped propel Athletic into the play-off places in Coca-Cola League One, is expected to become a target for a number of clubs during the January transfer window.

It was recently disclosed that Hughes has a £400,000 release clause in his current contract which expires this summer.

But in a bid to fend off interest, Athletic’s owners have come up with a financial package which would make Hughes the highest-paid player since they took charge in 2003/04.

Director Barry Owen, who was instrumental in Athletic signing Hughes on his release from prison 16 months ago, has been leading the negotiations.

He said: “Despite financial pressure, Simon Corney and Simon Blitz continue to support the club with ambition and drive and the package they have put together for Lee Hughes is an indication of this.

“The financial offer and length of contract is the best that has been made to any player since the owners arrived. Lee has indicated he would like time to consider the offer and the club fully understands his position.”

It is thought Hughes will wait to see if any other clubs make a move for him in January before making a decision on his future.

Stam limped out of the Boxing Day win at Crewe after straining a thigh muscle, though it is not serious and he has an outside chance of being back for Saturday’s league match at Huddersfield.

The outlook is not so bright for keeper Crossley, who may need back surgery which would keep him out until the end of March.

It is believed his hamstring strain, which is currently ruling him out, may stem from a back problem. And depending on what is contained in a specialist’s report, Crossley may need an operation.

Athletic extended their unbeaten league run to eight matches over Christmas, but manager John Sheridan is still disappointed. He had set his team a seven-point target from the three games.

Sheridan could not fault the effort of his players against Carlisle yesterday, saying all they needed was a little luck.

He said: “We are still unbeaten and there are a lot of good things to take from the games, but a win yesterday would have given everyone a lift as it would have moved us six points clear of Stockport, who are seventh.”