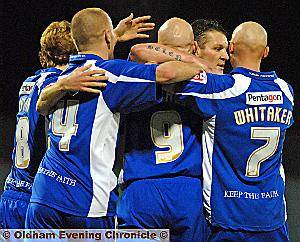 DEAN WINDASS made an impressive debut for Athletic, but was eclipsed by another player with the same christian name.

Athletic's victory over Hartlepool United in last night's hurriedly rearranged Coca-Cola League One fixture was secured by a stunning strike from Deane Smalley.

After six weeks without a home league victory, there were enormous sighs of relief at the final whistle after Athletic ended a run of three successive draws at Boundary Park with a win which lifts them into third place.

It also extended Athletic's unbeaten run in the league to 10 matches, a sequence stretching back to the first day of November.

More importantly, it was a much-improved display after being Athletic were disappointingly held by Brighton, Leyton Orient and Carlisle in their three previous matches at Boundary Park.

There was a much higher tempo to the game and Athletic should never have been in a position where they were holding on to a slender one-goal advantage.

They were unlucky to be denied three times by the woodwork – twice by Windass, the other by Danny Whitaker – as they answered Sheridan's recent call for them to be more productive at home.

Athletic were seemingly coasting to victory midway through the second half when an own goal from Kelvin Lomax handed ’Pool a way back into the game.

Suddenly, Athletic became nervous and jittery as they realised their opponents were in a position to claw their way back from the dead, which ensured a tortuous last quarter of the match.

Smalley was recalled on the right to provide added attacking thrust as the midfield was rejigged with Mark Allott ruled out through suspension.

Windass, as forecast, replaced Darren Byfield, who had returned to Doncaster following a two-month loan.

It was clear from the kick-off that Athletic were fired up and they would have taken the lead inside 15 seconds but for ’keeper Arran Lee-Barrett getting down sharply low to his left to keep out a shot from Lee Hughes.

’Pool, who were without injured 13-goal top scorer Joe Garner, lacked ambition early on and two of their players were warned for time-wasting in the opening 16 minutes.

At that time it looked as though it might be another of those frustrating games for the Boundary Park faithful.

But Athletic were handed a 21st-minute lead after a blunder by central defender Michael Nelson, who miscued a clearance from a Neal Eardley cross straight to Hughes who could scored have had a simpler 14th goal of the season.

Windass almost doubled the lead moments later when his well-struck free-kick clipped the top of the crossbar, while in stoppage time Eardley sent a superbly-struck volley fizzing just wide of an upright.

There was an amazing 90-second build-up to Athletic's second goal seven minutes after the restart.

Whitaker's initial header thudded against the crossbar, not long after the same player had a goalbound drive turned around the post for a corner by Lee-Barrett.

From the resulting corner, the ball was cleared to Smalley who sent a screamer into the top corner from outside the penalty area. Given his ability to hit the ball so cleanly, it is a mystery why he has found the net only twice this season.

It wouldn't be Athletic without a twist and Lomax provided that with his first goal for the club – but, sadly, at the wrong end.

Matty Robson fired over a low cross from the left and Lomax, attempting to clear the danger, smashed the ball into the roof of his own net.

If there was an own goal-of-the-season contest, then this would be high on the list of contenders.

Lomax almost made amends late on when he supplied a delightful cross from the left, only for a glanced header from Windass to rebound off a post.

But in the 90th minute Athletic had a huge let-off when Robson cut in from the by-line on the left and fired over a low ball across the face of goal.

Sean Gregan, trying to cut out the danger, was lucky not to turn the ball into his own net as his near-post clearance flashed inches wide.

JOHN Sheridan was relieved as Athletic finally banished their Boundary Park blues by registering their first home league victory since the last week of November.

The Athletic manager said: "I thought we played very well at times, passed the ball accurately and thoroughly deserved to win.

"But we made life hard for ourselves in the last 10 minutes when they had an opportunity at the end to equalise.

"We had a bit of luck, but it was a game which, in my eyes, we ought to have won comfortably. The main thing, however, is that we came away with a win."

Sheridan admitted he thought Athletic were in complete control when they led 2-0.

"We also hit the woodwork three times and possibly should have scored more while our ’keeper (Greg Fleming) hasn't had a shot to save."

Sheridan admitted his side became edgy and nervous.

He said: "It became too easy possession-wise and we got sloppy on one one or two occasions when we gave away the ball too cheaply.

"You always fear it will backfire on you as happened with the own goal when they were never in the game.

"We have played better and lost games, but the important thing is that we picked up three points.”

Sheridan was delighted with the debut of new loan striker Dean Windass.

He said: "You can see his quality, awareness and the way he creates space for himself.

"Hopefully we will benefit and the younger players will learn from him. I hope he will make us a better team and take us where we want to go.”

Sheridan was also impressed with the attitude and desire of Windass, his capture from Premier League side Hull City.

"Full credit to Dean. He is aged 39 and has enough money in the bank, but he wants to carry on playing which is why he has dropped down from the Premier to League One,” said the manager.

Hartlepool boss Chris Turner accused his team of paying Athletic too much respect.

"We were better in the second half and almost nicked a draw, but you have to be honest and say Oldham deserved their win," he said.