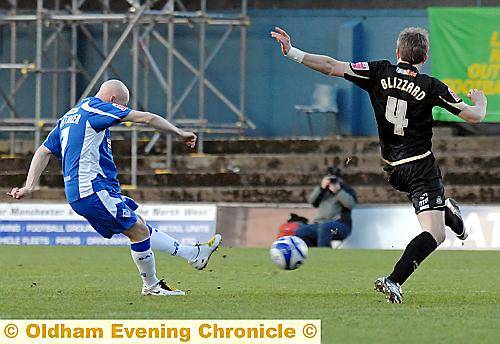 IT’S THERE: Danny Whitaker scores against Stockport County last season. Athletic kick off their campaign at home to their local rivals on Saturday, August 8.

County at home is first test

ATHLETIC kick off the 2009/10 season with a home derby clash against Stockport County.

Dave Penney’s men are up against a club currently in administration — though a sale has been agreed to a consortium headed by former Manchester City player Jim Melrose — and who lost manager Jim Gannon in April as part of a sweeping range of cost-cutting measures.

Last season, Athletic were beaten 3-1 at Edgley Park early October before winning by the same scoreline in the January return fixture in front of a Boundary Park crowd of 7,605, the third-highest home attendance of the season.

The return game against County is down to be played on Saturday, January 16.

There are three trips to London lying in wait during a difficult first month of the season. After making the trek north to face Carlisle in the Coca-Cola Cup, provisionally set for Tuesday, August 11, Athletic travel in the opposite direction to take on Leyton Orient on the second weekend of the campaign.

Penney’s side are then faced with a tough midweek trip to losing play-off finalists Millwall and the final game in August has the team playing at newly-promoted Brentford.

Other long away-days within the Coca-Cola League One programme include demoted Norwich City (Saturday, December 5) and two trips to the south coast in a month, to Exeter (March 6) and Southampton (March 27).

The home game against Leeds United is scheduled for the first day of December, with the away game at Elland Road being played out on Tuesday, February 23.

Athletic are at home on Boxing Day against Tranmere, doubling up two days later with an away fixture at Hartlepool, while the Easter weekend provides a home clash with Gillingham on the Saturday followed by a short trip to Huddersfield two days later.

A tricky end-of-season run-in ends with the visit of relegated Charlton Athletic.

Meanwhile, Dean Furman is the latest name to be linked with a move to Athletic.