You are Here: Home » News » Wilson hoping the frustration is over

Wilson hoping the frustration is over 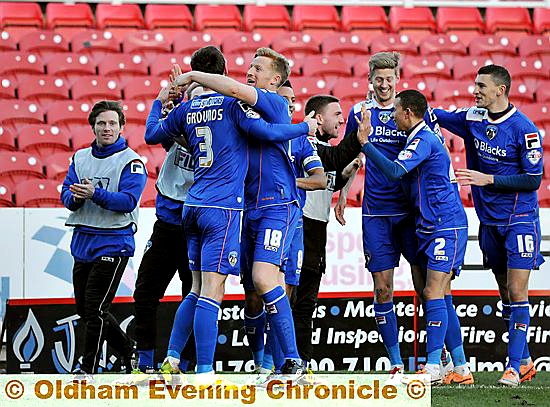 All in this together: new signing James Wilson (far right), Jon Stead (third, right) and John Paul Kissock (left) join in the celebrations after Jonathan Grounds’ winning goal against Swindon on Saturday.

JAMES Wilson had made only five appearances this season before joining Athletic: four on loan at Cheltenham and one as an early second-half substitute for Wales.

Three-and-a-half months later, with no sniff of first-team football at Ashton Gate for a year, Wilson proved at Swindon to be comfortable in dealing with players of a lesser class.

“He is a very good player who has been unloved for a while,” said Athletic manager Lee Johnson. “You aren’t a full Wales international, with 31 championship appearances to your name, without being a good player.

“He is a real good investment for the future as well. He has come in to show what he is about.”

Wilson secured his release from his Bristol City contract to sign for Athletic, in adeal that runs to the end of the season with an option to extend.

A steady run of first-team appearances would be of great benefit to a player whose career to date has been ruined by injuries.

“I know the gaffer from playing with him at Bristol,” said Wilson, ahead of the meeting with his

former club on Saturday at Boundary Park. “My time was up there, so I spoke to him straight away.

“I had a couple of bad injuries when I was younger — knee and ankle — and I am just glad to be back playing again. It has been frustrating at Bristol. I am grateful for the opportunity here.”

Wilson’s arrival looked to set to be the final piece of business conducted by Johnson on deadline day, before the late signing of loan forward Jon Stead from Huddersfield.

It concluded a very satisfactory period for Johnson: “We have sold James Tarkowski, but for a good price and with a big sell-on - and he’s coming back to us for the rest of the season.

“Eddie Joksts has moved out and I have replaced him with a Wales international in James Wilson.

“We have John Paul Kissock; put him with other good footballers and he will come into his own.

“And then we signed the experienced striker we so desired. I think Jon Stead will come in and be good for us.”