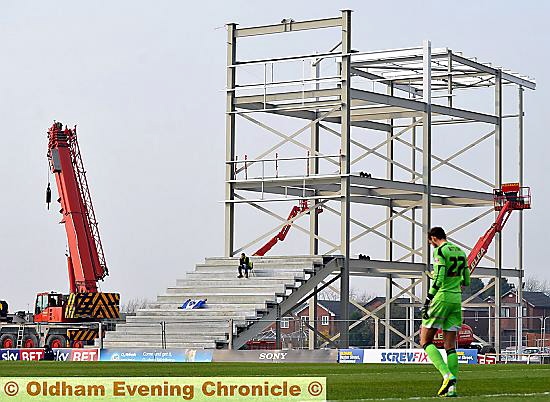 ROOM FOR ONE . . . pictured during Saturday’s home match against Brentford, the new North Stand starts to take shape.

ATHLETIC’S mean centre-back pair are fitter than ever — and ready to keep more clean sheets, starting with the trip to Bradford.

Adam Lockwood had made only ONE appearance this season before making his bow as a substitute for Athletic in late January.

And Wales international James Wilson — the stand-out player in Saturday’s 0-0 draw with Brentford — had played three times for Cheltenham prior to his Athletic debut at the start of February.

Manager Lee Johnson said he had no choice but to give the defensive duo time to gain fitness in the first team.

And after eight days in which Athletic managed a win and two draws against tough opponents, he wants more of the same at Valley Parade as the club continues to climb to safety.

“The problem with James Wilson and Adam Lockwood is that they have had to get fit through games,” said Johnson, who has watched the pair shut out four attacks - Swindon, Gillingham, Crawley and Brentford.

“Now they are. Locky is your organiser and Wilson is your pace and cover - and he was better in the air against Brentford. I was pleased with those two — as I was at Orient and Crewe. They are starting a good little partnership.”

Johnson said the squad he has assembled should take plenty of heart from their recent efforts.

“The lads should have a lot of confidence,” he added. “We knew these players had to gain their fitness from within games because we had to pick up the crumbs and chuck together a side of freebies and ‘unwanted’ players. I am pleased for them — but there’s a lot of work to do yet.

“We have to go to Bradford and put in a similar performance.”