You are Here: Home » News » That’ll do nicely 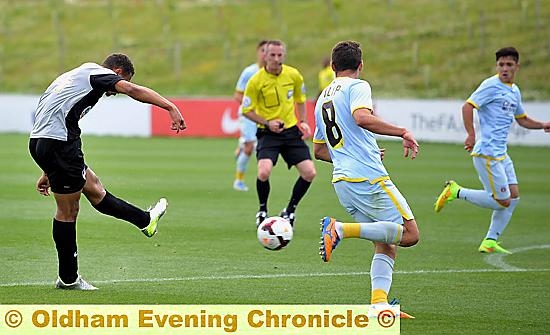 ATHLETIC boss Lee Johnson saluted the efforts of the 22 players who played their part in an encouraging performance during the opening pre-season friendly fixture.

Johnson’s men — two separate teams played a half each — went down 4-1 to Romanian champions Steaua Bucharest in a behind-closed-door match at the plush FA headquarters at St George’s Park near Burton.

The Romanians initially led through Robert Valceanu, before Athletic levelled courtesy of a splendid individual strike from Jonson Clarke-Harris shortly after the interval.

However, three goals in six minutes from Fernando Varela, Alexandru Chipciu and Gabriel Iancu secured victory as Steaua turned on the style in the warm sunshine.

Johnson said: “I was pleased with the run-out, definitely.

“The first half was particularly good from the lads. We moved well and shifted the ball around well and we created some good opportunities to score.

“Don’t forget we were only five days into our pre-season, and when you take into account the standard of our opposition, we did well.

“Steaua are a couple of weeks further on with their pre-season training as they’ve got a Champions League qualifier next week (away at Norwegian side Stromgodset).

“Our quality slipped a little in the second half, and that enabled Steaua to punish us with the three quick goals.performed

“The state of match fitness was never going to be a concern for me. Overall I was just pleased with how the players performed at this early stage of preparation.”

Six trialists featured on Saturday, but Johnson has allowed three of them to leave Athletic for now.

Former Hull and Walsall midfielder Nicky Featherstone and ex-Carlisle utility man Chris Chantler won’t be offered contracts at this stage, but Johnson is allowing former Kilmarnock striker William Gros another week to try to prove his worth.

Of the three unnamed trialists who played at St George's Park, only two have been invited to stay on this week.

There were no new injury worries to report following the game, just a bunch of tired bodies and one or two minor strains, knocks, aches and pains, which are commonplace so soon after resuming following the summer break.

However, all of the Athletic players who featured against Steaua enjoyed their experience at the FA’s state-of-the-art complex.

Johnson added: “It was brilliant for the lads to get that opportunity to train and play at a real football utopia.

“Some of the facilities are really are top class, as you’d expect. And the pitches are magnificent.

“If you like, it gave some of our younger lads the chance to see just how the other half live for a day.”

ATHLETIC are away to Curzon Ashton on Thursday (kick-off 7.30pm).