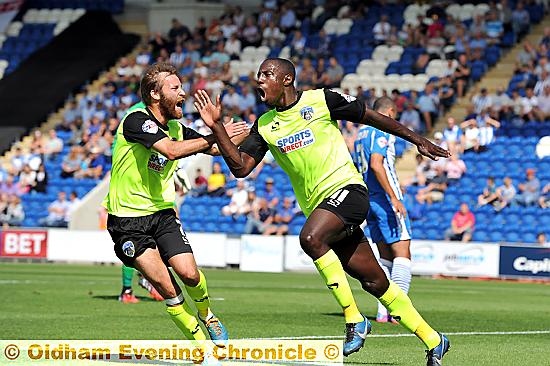 JONATHAN Forte admitted huge relief in banishing what had turned into his South coast hell.

The 28-year-old announced himself to Athletic by netting two well-taken goals before the interval at Colchester — on his first competitive appearance for any club for 16 months.

Forte could even have had a hat-trick, hitting a volley on the turn over the top in the second half at the Weston Homes Community Stadium.

“I hit it too well,” said a smiling Forte, after a pair of strikes which helped Athletic to a point in the opening Sky Bet League One game of the campaign.

“If I had scuffed it instead, it might have gone in.”

Forte admitted his extended period of inaction at Southampton, in which he didn't even get out to another club on loan last term, left him in football limbo.

“It was extremely frustrating, as circumstances meant I couldn't play,” said the former Sheffield United trainee, who signed a one-year deal with Athletic with the option of an additional season after his three-and-a-half-year contract at the St Mary’s Stadium ran out.

“I am just glad to be out there again.

“I just had to suck it up and go at the end of the season.

“I missed a full season, but I am so happy to be out there playing again.”

Forte picked up a slight knock and was withdrawn late in the game, but it is not thought to be anything serious.

George Elokobi also made his debut for Athletic as an 80th-minute substitute, looking solid and composed as Athletic saw out the game with the ex-Wolves man as one of three centre-backs.

It would not be a surprise if Elokobi, who signed a one-year deal on Friday morning, starts in tomorrow’s Capital One Cup first-round tie against Middlesbrough at SportsDirect.com Park.

“I am very pleased, not just for his ability as a footballer, but for his presence in the dressing room as a personality and as a character,” said Athletic boss Lee Johnson of the signing of Elokobi.

Johnson added: “He will endear himself to the fans as he is naturally such a good person and a leader.

“He will drive us forward and the more people like that we can get in the dressing room, the better.”

Johnson says the task facing his side against Boro — 2-0 home winners over Birmingham in their opening Sky Bet Championship clash on Saturday — is one they should enjoy.

He said: “It is at home so we look to go and test them. They are a good Championship side with top players, so we should really relish it.”