You are Here: Home » News » Tribute to a sporting all-rounder

Tribute to a sporting all-rounder 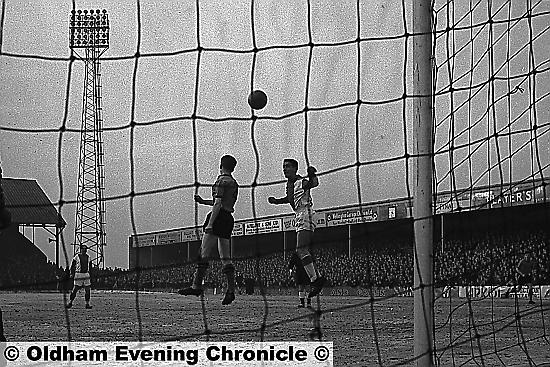 COLIN Whitaker heads the ball over the bar for Athletic against Stockport in January, 1963

COLIN Whitaker, who made 72 appearances for Athletic, has died at the age of 82.

The tricky left-winger played alongside one of the club’s great players, Bobby Johnstone, during a two-year stay.

He joined from Rochdale in October, 1962, in a swap deal that saw Peter Phoenix head in the opposite direction. Jack Rowley was Athletic’s manager at the time.

Whitaker, who started his career at Sheffield Wednesday, went on to score 29 times for Athletic. He also had spells at Bradford Park Avenue, Queens Park Rangers, Shrewsbury Town and Barrow, whom he joined after leaving Boundary Park in 1964. He later became player-manager at Stalybridge Celtic.

Whitaker was an all-round sportsman and coach. After training he would travel to Rochdale High School to work as a sports master, teaching football, cricket and swimming.

While playing for Shrewsbury — his third professional club — he turned his hand to cricket, starring for Shropshire in the Minor Counties Championship.

He was equally adept at golf and a member of the Brookdale club.

Retiring from his building business at the age of 59, much of his later life was split between his home in Ashton and the Costa Del Sol in Spain.