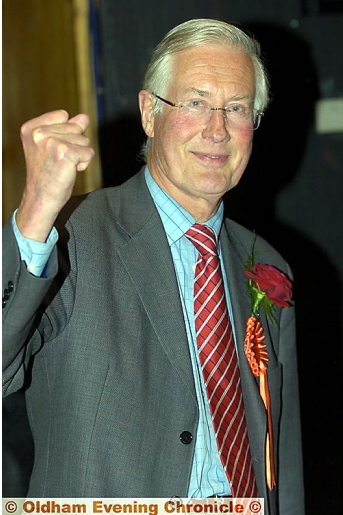 WHEN I mentioned I was travelling to Westminster to meet Michael Hugh Meacher, everyone was at pains to tell me what a good bloke he is.

And they were 100 per cent right. I spent two-and-half hours with the Member of Parliament for Oldham West and Royton and the time sped by. Our time was a joyous recollection of the life and times of a man full of anecdotes and stories.

We had coffee in the spacious cafe in the reception area of Portcullis House, where he has an office.

I had been in the company of Michael — I feel like he is a Michael to me now - on many occasions, often at important gatherings and Oldham civic events; but I had never really spoken to him at any length.

So here was my opportunity to get to know the guy who has represented Oldham in the Mother of Parliaments for more than 44 years - a record he plans to extend by standing again at the General Election next May.

With a resounding 9,000 majority he should be safe, but he takes nothing for granted: “Yes, I’ll be standing and hopefully I will get re-elected,” he said.

The question was apposite because Michael celebrated his 75th birthday days before our meeting, an age when a lot of people are beginning to take life more easily.

Not this man. There is a restless energy bristling through his core and he still feels there is work to be done for his constituents.

I got his views on several issues facing the country - and on the possibility he will become Father of the House should he be returned in May.

This possibility, coming in the year he received the Freedom of the Borough by his Oldham peers, fills him with disdain.

Not that he doesn’t respect the traditions of the House: after more than half a lifetime in the corridors of power he appreciates its idiosyncrasies. But he remains unmoved by the possibility of a spurious title. He has bigger fish to fry.

“I still regard myself as a young turk,” he says. “Being Father of the House I would have to represent the views of the House and help bring the House together at certain times — that’s not me.

“I intend to retain my integrity and want to speak out on the issues of the day and the issues that are important to me. Politics is for real, not for status or titles.”

There, in a nutshell, is the man. He places more importance on being awarded the freedom of the borough by Oldham.

“That’s meaningful,” he says. “It’s more than just a title, it is recognition of which I am incredibly proud. It means I have made a contribution to Oldham. Maybe I am unworthy, but I want to be worthy of such an honour.”

This was the second time Michael was self-deprecating. The first occasion came early in our chat, when he spoke about his birth in Hemel Hempstead, two months after the outbreak of World War Two.

His Wikipedia entry describes him as the son of an accountant and stockbroker. He was educated at Berkhamsted School, New College Oxford and the London School of Economics, where he gained a Diploma in Social Administration.

Much of that is true - certainly his education; but his father was a labourer on his own parents’ farm: “as far as I’m aware, father never held down a paid job in his life” — and his mother was a primary school teacher who became a doctor’s receptionist for 20 years.

“When I was three days old I had a temperature of 106 and the midwife told my mother to prepare for the worst. I survived. Life would have been so much simpler for so many people if I hadn’t.”

Michael has this knack of doing himself down and when I mentioned this he looked a little bemused. “Do I?” he replied with a genuinely perplexed smile. This was odd, for this is not a man wanting in self-confidence. He did, after all, offer himself as a candidate to lead the Labour Party in February 2007, when he declared his challenge to Gordon Brown and John McDonnell. But he stood aside to back McDonnell as the candidate of the left.

Michael, unfortunately, has a record of backing losers. He voted for John Prescott when he stood against Tony Blair and Margaret Beckett, after the untimely death of John Smith, in whom Michael had huge hopes and faith.

“I did vote for Ed Miliband; it’s the first time I have backed a winner,” he laughed, adding: “Ed is man of great integrity, beliefs and values. He shares the same principles I stand for.

“That’s what matters in politics — what you stand for, what you are going to do. I believe the Labour Party lost that for a while, especially under Tony Blair.

“We had the power but we didn’t use it; I’ll never forgive Tony Blair. Never. It was a betrayal. The people voted to end Thatcherism and Blair carried it on.”

The exasperation leaked out of every pore and that last statement was directed with such force and certainty of belief that it belied much of the Michael personna I had so enjoyed up to that point.

But here was laid bare the cold core of steel that runs through this man of the people.

He added: “Blair put me into the Ministry of the Environment as he probably thought it was a bit of a backwater and he could ship me off. But he was wrong; I revelled in it.”

Michael remains a spokesman on environmental issues but he also voices his opinion on matters of the day. When we met he was part-way through writing another article for the Guardian and he will continue to be a spokesman for the Left.

He describes himself with some difficulty as probably “lower middle class” — after all, he was born in Berkamstead and went to public school - albeit on a scholarship - and he was a university lecturer. But his roots are firmly among the working class.