You are Here: Home » News » Heartfelt thanks 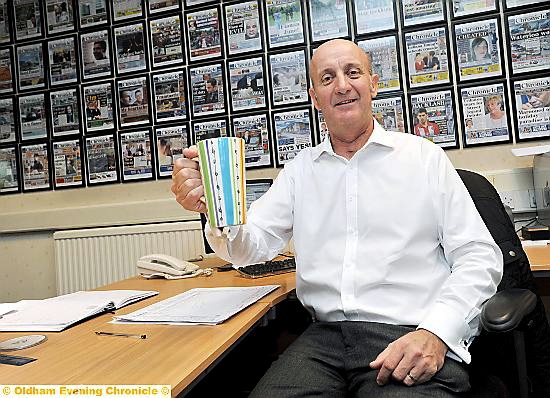 BREW time . . . Dave Whaley back behind his desk with Stripey

The Chronicle’s Managing Editor concludes the year-long saga of his battle with throat cancer.

On the last day of April, 2015, I plan to be sitting poolside in Tenerife, champagne in hand, toasting “life” alongside my wife and friends.

All that has happened in those 12 months I have conveyed to paper and the response to the “Keep Smiling” articles has been uplifting and humbling.

So many of you have let me know how they have drawn inspiration from my own experience as they take on their own battles.

‘Team Whaley’ has been massive. I haven’t felt alone during a single step of this fight, such has been the determination of all around me to be positive about outcomes and encouraging when times got tough. I’m not suggesting others open themselves up to such public scrutiny, but it IS good to talk. Don’t go through such things in silence. Your family and friends will be amazing if you let them.

I know my self-determination and positive outlook have been at the core of my recovery. But that could well have waned had it not been for others on my side: a shout across a street or fairway, a “we read it every week”, the shake of a hand, a brief word. Cards and letters from people I don’t even know! And I am delighted to report that I am continuing to astound the doctors with my recovery — especially in the eating stakes. It’s only a matter of weeks ago that I was celebrating taking my first sip of water as the newly-configured throat (minus vocal cords) worked out how to swallow again. Now it’s anything goes!

The swallow that was akin to taking a tablet has become second nature and I eat anything and everything!

Dietician Roisin has now signed me off her home visits rota as the last time I got on the scales for her I had put on 8lbs. 8lbs!

She had been concerned that in my quest for fitness and stamina (such as my virtual 452km cycle ride to St Andrews and my desire to get back to golf) I was still losing weight and couldn’t eat enough to turn the tide.

I had lost over two stone post surgery and she was in the process of getting me to drink some extra supplements to help. No need now. Just sit me down in front of an all-inclusive buffet breakfast!

I did that for five days to celebrate the 60th of my golfing buddy Mike Cocker. The four of us played every day (admittedly i needed a buggy on the rolling Algarve terrain). I might be a struggling 11+ handicap golfer, but I’m off scratch at least at the buffet. The lads were long finished when I was still working my way through my seven-course regime of fruit juice, cereals, fry-up, hams and cheeses on bread, croissants and fresh fruit, washed down with lots of coffee. It fuelled me for the day’s golf, and I certainly got my money’s worth on the food front!

I was so grateful the professor urged me not to cancel the trip when we found the cancer hadn’t gone away late last year, but instead to leave it open as a goal to aim for. I went. I smashed it. I even won (in a pair) on two of the days.

So having tipped the scales at a fighting weight of 14st 3lbs (I can now ditch the full-cream additives etc) I was happy to get back into the routine of going to work every day, albeit part-time to start with after my overdoing it a few weeks previous.

I look healthier, not so drawn in the face and with more colour. The return to work even impressed the unflappable Professor Homer when I went for my latest check-up last week, which included the obligatory camera up the nose routine.

I still don’t have much of a voice — it’s more of a whisper that isn’t much use when there is any background noise — but improvement, we were told, will come in time and I have to be patient.

While down at Manchester Royal to see the surgeon and speech therapist Frances Ascott, we also bumped into Bill, the Droylsden man I was asked to mentor prior to his own similar operation a few weeks after mine.

We had heard he had a bad time with a throat infection, but were overjoyed to see him looking great and smiling as he told us of his new grandad status.

So here I am, back behind my desk on Union Street and reunited with my big brew mug Stripey.

Once again, I thank all those who have been on this journey with me. It will be a few years before I get signed off by the Prof, and life will never really return to what stood for normality before.

We have a very different outlook on that now — hence the hastily arranged holiday in Tenerife prior to a full-time return to work. My outlook remains totally positive. This adversity has brought our family closer together than ever before.

My last word has to be about my wife and my rock, Wendy. She has been at my side every step of the way and if she asked me for the world, somehow I’d get it.

All she asked was for me to win this battle. So far so good...