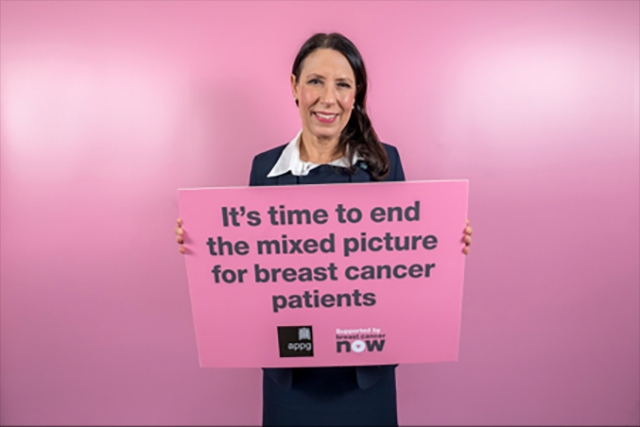 Oldham East and Saddleworth MP Debbie Abrahams is calling for an end to the ‘stark inequalities’ in breast cancer diagnosis and care across England, following the launch of a new report by the All-Party Parliamentary Group on Breast Cancer (APPGBC).

The landmark report uncovers the true extent of the ‘postcode lottery’ in breast cancer diagnosis and care across England, with women in worst-affected areas found to be more than twice as likely to die from breast cancer under the age of 75 than those elsewhere in the country.

Following a year-long inquiry (October 2016 - November 2017), which gathered evidence from NHS leaders, clinicians, patients and charities, the report found that while overall outcomes for breast cancer are improving, geographical inequalities exist across England in screening, early detection and access to treatment and services.

Commenting on the findings of the report -  A Mixed Picture: An Inquiry into Geographical Inequalities and Breast Cancer - Abrahams said: “There are clearly stark inequalities and widespread differences in the diagnosis, treatment and care of women with breast cancer, based on where they live, are shocking.

“It was incredibly moving to hear from speakers at the launch event of this report just how difficult it can be for breast cancer patients to get the support they need.

“It’s so important to attend routine mammograms so that we can detect breast cancer as early as possible to give women the best chance of survival.”

Baroness Delyth Morgan, Chief Executive at Breast Cancer Now, which supported the inquiry, said: “These are really concerning findings. While overall, more women are surviving breast cancer than ever before, this crucial report uncovers variation in breast cancer services on a major scale.

“With patients and healthcare professionals alike already feeling the impact of the workforce shortages across the country, this alarming report must now act as a wake-up call. All women with breast cancer deserve the best possible chance of surviving and living well, no matter where they live, their age or the colour of their skin.

“This report shows too many women miss out on the best breast cancer care this country has to offer.

"We urge NHS England and Public Health England to take immediate action to ensure all women in Greater Manchester and across the country receive fair access to the care, treatment and support they need.”