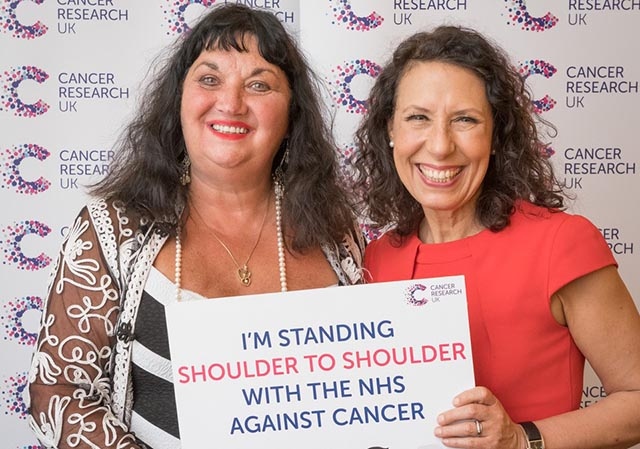 Debbie Abrahams, MP for Oldham East and Saddleworth, along with Cancer Campaigns Ambassador and constituent Dr Nicola Jeffery-Sykes, from Uppermill. They pledged to stand ‘shoulder to shoulder’ with the NHS against cancer at the Westminster launch of Cancer Research UK’s new campaign

Mrs Abrahams joined Nicola and other campaigners in Westminster at the launch of the charity’s new campaign - ‘Shoulder to Shoulder Against Cancer’.

The campaign encourages everyone to stand shoulder to shoulder with the NHS by calling on the UK Government to tackle the chronic shortage of staff who diagnose and treat the disease.

Mrs Abrahams said: “More people are surviving cancer than ever before, thanks to the fantastic work of the NHS staff who turn breakthroughs in research into vital tests and treatments.

“But as the health service reaches its 70th birthday, it’s facing unprecedented challenges.

“Every year, around 1,200 people are diagnosed with cancer in the NHS Oldham CCG area and around 570 people die.

"With this number set to rise, it’s vital that we have an NHS which is fit to deliver world-class care for all cancer patients now and in the future.

“That’s why I’m backing Cancer Research UK’s call to stand shoulder to shoulder with the NHS against cancer, so that everyone has the best possible chance of surviving this devastating disease.”

Dr Jeffrey-Sykes, a constituent and Cancer Campaigns Ambassador, said: “As someone who has been impacted by cancer, I have utmost respect for the wonderful work of the dedicated NHS staff who are on the frontline fighting cancer.

“We know they are under enormous strain, so it’s up to all of us to stand shoulder to shoulder with the NHS against the disease and help prevent a future crisis.

“I’m calling on MPs and the public to support this vitally important campaign because by acting right now, we can improve survival and help make our cancer services among the best world.”

For 70 years the NHS has been at the forefront of fighting cancer, but with a growing and ageing population cancer services are struggling to cope with the increased number of diagnoses.

This means more staff are urgently needed to keep up with the demand for life-saving tests and treatments, yet already one in 10 NHS diagnostic posts are unfilled.

In the UK, cancer survival rates are still lagging behind the best in Europe and in England nearly half of all cancers are diagnosed at an advanced stage, when they are harder to treat successfully.

Cancer Research UK’s ambition is for this to be three in four by 2034.

To help save more lives, investment is needed in key professions, including radiographers and radiologists who carry out and interpret scans such as MRIs, endoscopists who look inside the body by inserting a tiny camera and pathologists who look for abnormal cells, as well as oncologists (cancer specialists), nurses and surgeons.

To take action visit: cruk.org/shouldertoshoulder or join the conversation on twitter: #ShouldertoShoulder