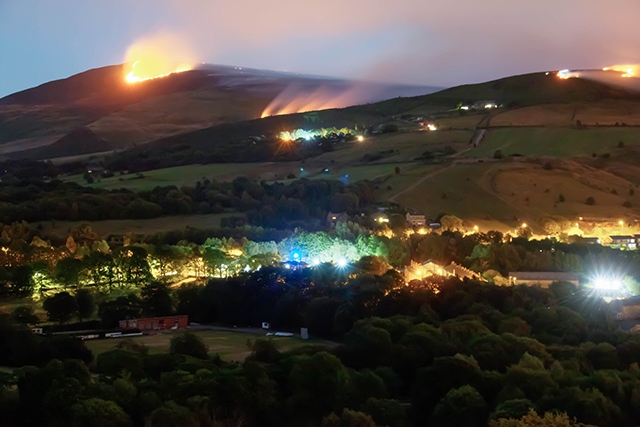 Greater Manchester Fire and Rescue Service claim the major blaze on Saddleworth Moor is creating a ‘belt of fire’ as numerous small fires begin to join up.

A major incident was declared overnight and Greater Manchester Police have announced they’ve asked for the army to be placed on standby should they be needed.

Residents across Mossley, Stalybridge and the surrounding area are being advised to only go out if necessary and keep all doors and windows closed as the smoke, which isn’t thought to be toxic, continues to billow from the scene.

The Chronicle has also heard numerous reports from across Tameside and even into Oldham and Oldham Edge of people waking up to find a covering of ash on their cars, windows and gardens.

Fire crews have returned to the tackle the blaze, after being stood down overnight, with around 50 of them expected to continue to attempt to get the fire under control.

Public Health England have issued a statement, saying: “Smoke is an irritant and can make eyes and throats sore - wash your face with soap and water and keep hydrated by drinking water. If you have any health concerns contact the NHS 111 service.”

Meanwhile, Greater Manchester Fire and Rescue Service said: “Firefighters have worked through the night to keep the flames at bay and at first light this morning, offensive firefighting on the moors has recommenced.”

“Throughout yesterday we had nine fire engines and two Wildlife Units in attendance, with support from various partner agencies including Derbyshire Fire and Rescue Service.”

“We also used a helicopter over the area which dropped water onto the fire. At one stage the fire measured 6km.”

Tameside Council have issued their own safety advice via their Facebook page.

On it they state: “Residents in areas affected by smoke should stay indoors, keep their doors and windows closed, and tune in to the local radio station for advice and information.

"Motorists who have to travel through the smoke should keep windows closed, turn off air conditioning and keep their air vents closed.

"If people need to be outdoors, they are advised to avoid areas affected by any smoke or ash, or to limit the time that they spend in them.

"Smoke can irritate air passages, the skin and the eyes leading to coughing and wheezing, breathlessness and chest pain.

"It can also worsen existing problems such as asthma and people with asthma should carry their inhaler with them at all times. Anyone concerned about their symptoms should contact their GP or NHS Direct."

Fire fighters were first called to moorland between Dovestone Reservoir and Buckton Vale at around 8.20pm on Sunday to reports that a fire had been started, they managed to extinguish that blaze but another one was started during the early hours yesterday morning (Monday).

Crews believe the second fire was started due to the heat. However, they haven't given any indication as to how they think the first fire started on Sunday evening.