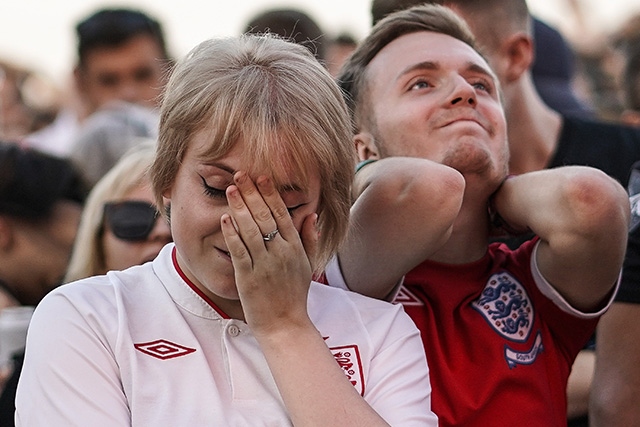 It proved to be utter dejection for England fans last night

As the rain finally fell on Oldham this morning, the realisation will also have sunken in that every England football fan’s dream of World Cup glory is also finally over.

The last month has seen an epic ride for Gareth Southgate’s young team at the four-yearly showpiece in Russia this time, and pride in the footballers has well and truly been restored.

Football fans across the country had seemingly fallen out with their overpaid stars following a group stage exit at the last World Cup in 2014, and the subsequent disaster at the European Championships two years later when then manager Roy Hodgson’s team were embarrassed by Iceland.

England’s fans inside the Luzhniki Stadium in Moscow, and in homes, pubs and clubs across England may have seen their team throw away a lead to eventually lose 2-1 to Croatia after extra-time last night, but they have all fallen back in love with the national football squad.

The England players "came of age" during the World Cup, said new manager-of-the-moment Southgate after their semi-final defeat by Croatia.

The Three Lions took an early lead via Kieran Trippier's free-kick, but the Croats battled back to win 2-1  and reach their first final.

"There'll be a new benchmark and level of expectation," said Southgate.

"To become a winning team there are hurdles you have to overcame - and we've surpassed many of them.

"Many of our players have come of age on the international stage.

“This was a wonderful opportunity and you can't guarantee they'll come again, but equally we want to be a team who hit quarter-finals, semi-finals and finals.

“We've proved to ourselves and our country that's possible.

"A lot of teams who go on to win trophies lose in quarter-finals or semi-finals first.

"At the moment we all feel the pain of defeat.

“I don't think realistically we expected to be here. But once you're here and played as well as we did, you want to take those opportunities in life.

"I'm remarkably proud of the group of players - the reaction of the supporters compared to two years ago shows the country are proud of the way we played."

England captain Harry Kane – who has six goals in the tournament ahead of Saturday’s third-fourth place play-off against Belgium in Russia, said: "It's been an amazing run but it hurts to lose, it really hurts.

“We wanted to go on and win it and we thought we had enough to go through but it wasn't to be.

"In big games, small margins make the difference and they had a ball that fell their way at the end and he stuck it away.

“We played well at the start and in extra time but we missed a few chances to kill them off.

"There are a lot of positives to take from this tournament. It's a big stepping stone from two years ago."

Juventus striker Mario Mandzukic scored the winning goal in the 109th minute of the semi-final, slotting in from Ivan Perisic's flick-on into the area.