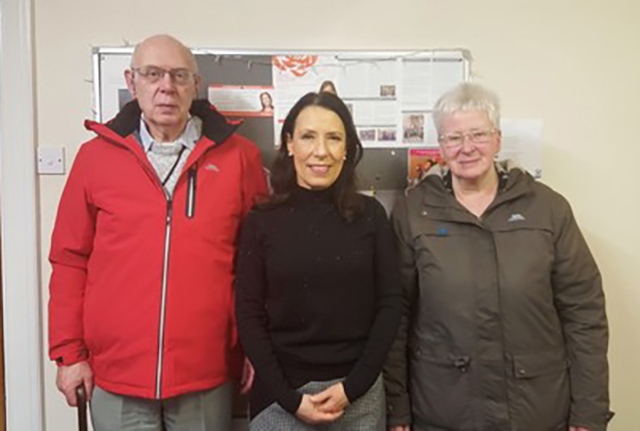 MP Debbie Abrahams with Barrie Wild and his wife Val

Oldham East and Saddleworth MP Debbie Abrahams has welcomed ‘long overdue’ changes to the blue badge parking scheme - which she has campaigned for - after the Government announced it is to be extended to cover people with non-physical conditions, like dementia and autism.

Mrs Abrahams, who has set creating a dementia-friendly Oldham as one of her top priorities, has also campaigned to encourage people to take part in an online consultation that has led to the blue badge changes.

She said: “This is long overdue but I’m very pleased that these changes are coming in as some disabilities are hidden, so to speak.

“Tasks the majority of us take for granted, like shopping, going to the doctors or out for a social event, can be much harder for someone with dementia.

“Having a blue badge is going to make life a little easier for many people, and their carers, who are living with dementia, autism and mental health issues.”

Until the changes were announced the process for getting a blue badge varied from one local authority to another as the national criteria was not clear on the how the scheme covers physical and non-physical conditions.

The change in policy could mean that tens of thousands of people with hidden disabilities such as autism, dementia and mental health conditions may be eligible to get a blue badge parking permit from next year.

Mrs Abrahams, who is a Dementia Friend and was the first MP to become a Dementia Friends Champion, added: “A few months ago I supported Barrie Wild, and his wife Val, in their bid to get a blue badge parking pass.

“Barrie went through the assessment process but was left drained and upset by the series of tests used and was told he didn’t qualify for a badge.

“Creating a blue badge system that is the same across the country should make the assessments easier for people with these non-physical conditions and make it easier for councils too if they operate under one, clearly defined, process.

“That’s why I was so keen to promote the blue badge consultation and I’m delighted with the changes that have been promised.

“I’m aware Barrie is applying again under this new scheme so I’m hopeful the process will be easier and that the outcome will be in his favour.”

Earlier this year Age UK helped Barrie, who is from Lees, fill out an application form and he went for an assessment at the Link Centre in Oldham.

Commenting on the process at the time, Val said: “Barrie was asked to do a walking test and informed that his walking was satisfactory, which we presume meant he was fit enough not to be eligible.

“By the time we got home Barrie was exhausted and upset.”

Barrie, who has poor balance and falls over sometimes, is relieved he can apply again for a blue badge.

He said: “I didn’t qualify for a blue badge at my last assessment but, with this updated scheme, maybe I will now.

“I don’t think people understand how difficult it is doing everyday tasks such as shopping or going to visit friends which can often give me headaches and disorientation.

“Having a blue badge would make life so much easier for me and for Val who cares for me.”

Sally Copley, Director of Policy, Partnerships and Campaigns, at Alzheimer’s Society, said: “This decision will be an absolute game-changer for people living with dementia.

"It will bring great benefit to many of the 850,000 people currently living with dementia in the UK.