The Peterloo massacre - read the story of Oldham's forgotten tragedy 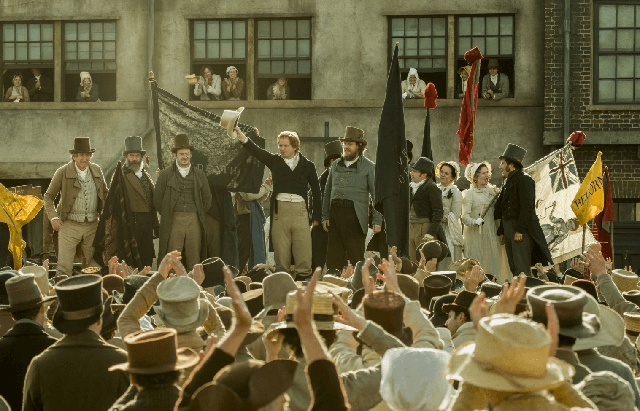 A still from the forthcoming film about Peterloo

As the bicentenary of Peterloo and release of Mark Leigh's new film approach, we look back at Oldham's role in the massacre that shaped our democracy.

In the years preceding 1819, authorities were becoming increasingly nervous about the possibility of revolt.

It was no wonder there was unrest.

As more machines were introduced, Lancashire weavers were denied legislative protection and their calls for a minimum wage were ignored.

At the same time, the infamous Corn Laws swelled the profits of wealthy landowners as the costs of living rose for the poor, worsened by increasing taxation to fund the extravagant habits of the Prince Regent.

The people were suffering, as William Rowbottom wrote in 1809.

He stated: "There was no poor family which had power to brew ... for there are hundreds in Oldham parish who are entirely without work, weaving is at the lowest ebb ever remembered."

Radical ideas were published to the working classes in the form of pamphlets, cartoons and satirical verse.

Even when tax on publications was raised, people worked together to access the material and groups met in secret to read banned texts which condemned the exploitation of the poor.

The Hampden Clubs where political issues were debated extended to the north, with Royton's being the first outside of London and other groups forming in Oldham and Rochdale.

Despite his best efforts the groups remained determined that the right to vote would be key to their emancipation.

On August 16 1819, orator Henry Hunt (along with Oldham's John Knight) was due to speak to the crowds, but it all erupted before they had the chance.

Crowds of up to 80,000 gathered in their Sunday Best with spirits high as they headed to St Peter's Field, Manchester.

They included the Oldham Contingent who met at 9am on the Village Green, where they were joined by those from Chadderton.

One of the many banners carried belonged to The Royton Female Union, a group of two hundred women campaigning for their right to vote.

They marched in white in defiance of the slander they had been subject to as a result.

Before Hunt had even spoken, thirty townsfolk signed an affidavit suggesting that the town was endangered and that the speakers ought to be arrested.

The Deputy Constable demanded the assistance of the military.

Tasked with apprehending the speakers, the Manchester Yeomanry were the first to arrive.

One knocked down a woman and a two-year-old child who would become the first fatality of Peterloo.

Once the Yeomanry had been separated, the 15th Hussars were sent - sabres drawn - to disperse the crowd.

John Lees, a spinner from Oldham, was killed with a number of family members as witnesses.

Ann Barlow had her breast bone broken as she was crushed by the crowd and was left bruised by constable's staves.

John Coop from Hollinwood had his leg wounded by trampling.

These are just a few of the 15 deaths and up to 700 injuries recorded on the day.

In response, the government said they stood by the actions of the military and magistrates, and further crackdown on reform followed resulting in the creation of the Six Acts.

Publicly, however, the events were met with outrage and inspired 28-year-old witness John Edward Taylor to start the Manchester Guardian - now The Guardian - to campaign for reform.

A defining moment in British history, many are determined that Peterloo will not be forgotten.

Meanwhile, an annual Peterloo mass rally is being organized by the Greater Manchester Trades Council and that takes place on Sunday, August 19, close to the Plaza of the Manchester Central Convention Centre, the actual site of the massacre.

The rally starts at 1pm.