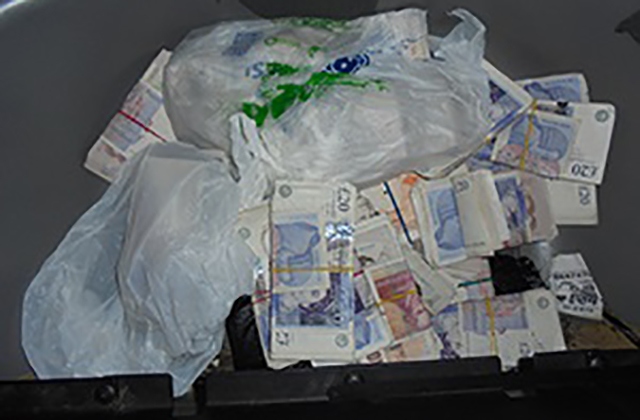 A Rochdale drug dealer who sold drugs to prison inmates has been jailed, following a National Crime Agency investigation.

Twenty-two-year old Mohammed Sajid, from Rochdale, was initially stopped by Border Force in November 2016 as he and 43-year old Robert Zalega, from Warrington, prepared to board a Channel Tunnel train.

Zalega, told officers they were travelling to Osnabruck in Germany to buy tyres for Sajid’s business, and claimed he was going to translate as his friend could not speak German.

The car they were travelling in was searched after a sniffer dog indicated there was something in the boot area. Bundles of cash amounting to just over £35,000 were recovered from inside the spare wheel well.

Both Zalega and Sajid were arrested on suspicion of money laundering.

Zalega initially said the money was his savings, however none of his fingerprints could be found on any of the notes and checks of his salary for the past four years did not support he had savings to that extent.

NCA officers then searched their home addresses, recovering quantities of Class A and B and C drugs and mobile phones.

One such phone belonging to Sajid showed that he was in contact with prison inmates, arranging to supply them with drugs.

A number of suppository shaped packages used to smuggle the drugs into prisons were also found by officers, as well as miniature mobile phones and top-up vouchers which could be sneaked into jails.

On Monday, November 26, a judge at Canterbury Crown Court sentenced Sajid to 40 months in prison for money laundering and drugs offences.

Zalega was handed a 12 month sentence suspended for 18 months, and ordered to do 200 hours unpaid work for money laundering.

Both men had admitted the offences at an earlier hearing.

"His story was shown to be false when our investigators examined a number of phones and found no evidence to support his story.

“However, the phones did reveal to investigators that Sajid was in contact with jail prisoners and selling them Class A, B and C drugs.

“In reality the cash seized was likely the profit of this criminality. In putting him behind bars we have put an end to his criminal enterprise.”