You are Here: Home » News » Main News » A great sense of pride after 10 years of nursing accreditation scheme 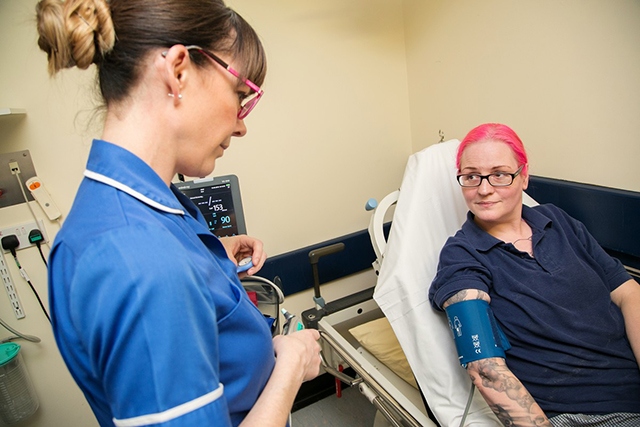 The Nursing Assessment and Accreditation System (NAAS) was introduced in 2008

Nursing teams across the Northern Care Alliance are celebrating a scheme which has become the bedrock of their work to improve standards for patients over the past 10 years.

The Nursing Assessment and Accreditation System (NAAS) was introduced at Salford Royal in 2008 as a mechanism to assure patients, visitors and staff that patients are receiving Safe, Clean and Personal care (SCaPe) every time.

It provides nursing teams with a set of standards and indicators, including patient experience, patient safety, end of life care, communication, infection control and team work, to strive towards with the end goal of achieving SCaPe status.

Wards are inspected on an unannounced basis and are assessed against the standards and given a level 0 to 3 (0=Red, 1=Amber, 2=Green, 3=Blue).

A ward must achieve Green status three times, eight months apart before being awarded Blue, which is SCaPe status.

This ensures that the ward can demonstrate reliability and sustainability of the standards.

Alongside a ward becoming a SCaPe ward, the ward manager is promoted to matron to recognise their outstanding leadership.

A ward must openly display its SCaPe status to patients, visitors and staff on an information board at the entrance to the ward.

Nursing teams were involved in the creation of NAAS and the system has created a great sense of pride and ownership amongst the organisation’s nurses and the colleagues they work with in their wards and teams.

Chief Nurse for the Northern Care Alliance Elaine Inglesby-Burke said: “At the heart of NAAS is the ambition for teams to reach and then sustain high standards of care for our patients.

“Working towards SCaPe status is a journey for the whole ward or service. It entails the nursing staff linking in with many other colleagues like housekeepers, doctors, allied health professionals and domestics whose input is vital in reaching the standards of NAAS.

“NAAS may be 10 years old now but when I see a team reach SCaPe status and the pride and excitement staff feel and the ward matron walking the corridors in the red uniform they move into upon gaining SCaPe, I can honestly say it feels as wonderful now as it did in 2008.

“When Salford Royal started working with Pennine Acute, we put different options to the teams at North Manchester, Fairfield, Rochdale Infirmary and Royal Oldham in relation to the system they could use to guide their standards.

"They were clear to us that they wanted to work to NAAS.

"We were thrilled as it demonstrated a clear desire to push for the highest standards for their patients.”