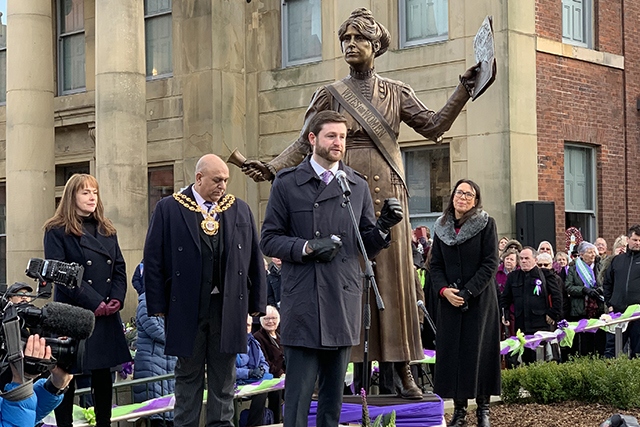 An emotional morning and afternoon has seen the eagerly-awaited unveiling of the statue of Oldham suffragette Annie Kenney take place in front of huge crowds in the town centre.

Hundreds of Oldhamers, including local MPs and a number of other dignitaries, took part in the superbly organised event, which including performances, a procession through the town centre, and then the unveiling of the statue itself, which was conducted by a group of local school children.

Annie was a key figure in the suffragette movement, and prior to that she lived and worked in Oldham, having been born in Springhead.

The date of the unveiling is significant.

So it was fitting that that date was chosen to remember Annie’s role in this achievement.

The unveiling was organised by the Director of Oldham Theatre Workshop in conjunction with Oldham’s Town Centre Management team.

A procession up to the statue through Parliament Square then followed, before more performances from local actors and the unveiling itself in front of the gathered crowds.

MP Mr McMahon, who is also Chair of the Annie Kenney Memorial Fund, told the Chronicle: “This has been both amazing and emotional.

“It’s been two years of solid fund-raising events that have got us to this point.

“Not a single penny for this has come from the Council, the Government or the Lottery. This is genuinely a people’s statue.

“It is an absolutely beautiful statue, and not only that, Annie’s story has now been told to thousands of people, not just in Oldham.

“Two years ago, Annie Kenney’s was Oldham’s best kept secret, but the statue in Parliament Square really is a staggering addition to our town centre.

“I want this to help Oldham people celebrate our town and who we are.

“People from here have changed the world.

“It’s been great to see so many young people here, too.

“It’s been emotional for me to hear those young people sharing her story, the story of just how amazing Annie was. I’m absolutely overwhelmed.”

Oldham Council Deputy Leader Arooj Shah added: “What’s really powerful about this is absolutely everybody in Oldham owns this statue.

“People have donated to the fund from all over Oldham and beyond.

“Today, Annie Kenney being here is a credit to everyone in Oldham.

“That includes all our children, because they have played a massive part in the fund-raising throughout the project.

“Everybody knows who Annie is now, and nobody can take her away from Oldham. That is simply amazing.”

Read all about Annie Kenney and her legacy here - she really was a remarkable woman.