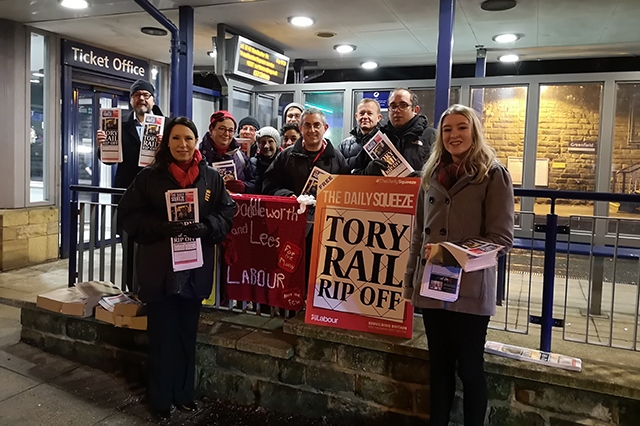 Oldham East and Saddleworth MP Debbie Abrahams has led a protest at Greenfield station against the 3.1% average rise in rail fares across the UK and reiterated Labour’s commitment to nationalise the country’s entire rail network.

Mrs Abrahams said: “We’re protesting at Greenfield station to mark an average increase in rail fares of 3.1% at a time when there’s absolute chaos in our rail transport services in Greater Manchester as a whole.

“What I’m demanding of Chris Grayling is that the franchises for Northern and for TransPennine Express should be brought back into public ownership.

“The standard of rail travel they are providing for rail passengers is unacceptable.

“Recent analysis of Government data shows in the four and a half years since the Northern Powerhouse agenda was set by the Tories, transport spending per person has increased twice as much in London as in the North of England.

"The IPPR North think tank has found that while the capital has seen a £326 per person increase in public spending, the North of England has seen an increase of just £146.

"These are shocking figures which continue to show the under investment in our local transport infrastructure."

Reflecting on the national situation, Mrs Abrahams added: “Under the Tories, regulated fares, which include peak fares and season tickets, have risen by 36% since 2010, two and a half times faster than wages.

"And this is at at time when train punctuality has fallen to a 13-year low with one in seven trains missing their target of arriving within five minutes of scheduled time.

“The Transport Secretary, Chris Grayling, and the Conservative government are failing rail passengers.

"Prices are rising, performance is in decline, promised investment has been scrapped and industrial relations have worsened.

"Government rail policy has not delivered affordable fares, decent services or value for money for taxpayers.

“Passengers, our economy and our environment need affordable fares and reliable services, which Tory policy is failing to deliver.”

Mrs Abrahams has also been campaigning to get better rolling stock and access for people with mobility issues at Greenfield station.

She added: “Labour would take our railway back into public ownership as franchises expire, using savings to cap fares, and would upgrade and expand the rail network.”