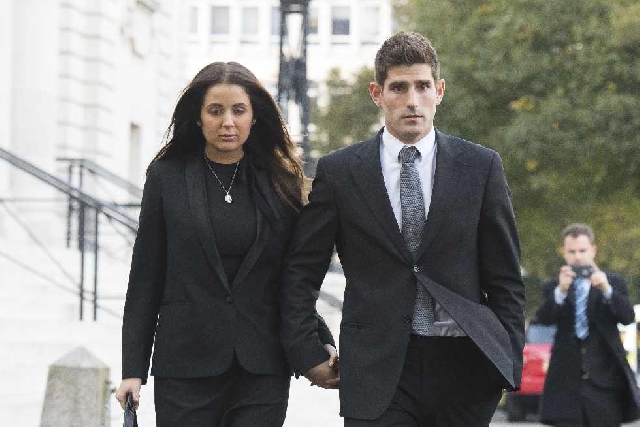 Ched Evans with his partner Natasha Massey during his retrial

Former Welsh international footballer, Ched Evans, has settled out-of-court with his original legal team over their handling of his rape trial, which he was jailed for back in 2011.

The 30-year old, who was a target of Oldham Athletic when he left prison in 2015, was jailed in May 2011 after being found guilty of raping a woman in a hotel room in Wales.

He always denied the charges against him.

At the time of his trial the former Sheffield United striker was handed a five-year prison sentenced, he was released on licence in in October 2014 and became a target of Oldham Athletic during January 2015.

However, the club pulled out of a deal to bring him to Boundary Park after a petition against the move gathered more than 30,000 signatures within 48 hours. Latics also said securing his services could have led to “significant financial pressure” on the club with one sponsor pulling out of a deal and another threatening to do the same.

In 2016 Evans, who now plays for Fleetwood Town on loan from Sheffield United, had his rape conviction quashed after new evidence was found by private investigators.

At a retrial the jury took just three hours to go through eight-days of evidence before finding the former Manchester City player not guilty of rape.

He returned to football prior to his retrial when he signed a deal at Chesterfield before being sold to Sheffield United in May 2017 and was sent to Fleetwood Town on loan in July 2018 where he’s featured in 35 games, scoring 15 goals.