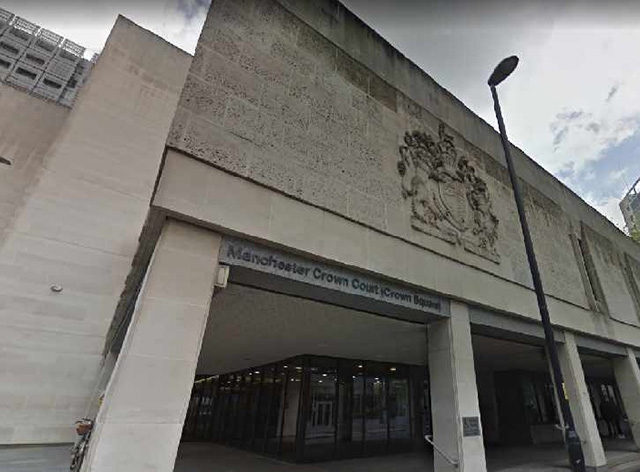 A Chadderton mum who used her baby daughter as a 'distraction' while trying to smuggle drugs to her ex-partner has been spared jail.

Lauren Maskery, aged 24, tried to hand over a package containing pieces of paper with Spice laced onto them to her ex, drug dealer Keiran Flanagan, in Strangeways.

Manchester Crown Court heard how the pair had been in relationship for three years and had a daughter together, then aged 16 months.

The court heard that at the time, their relationship was 'coming to an end'.

Flanagan (29), had been calling Maskery and sending messages pressurising her into bringing a package into prison, her barrister said.

She had initially refused, but caved in to the pressure and went to Strangeways on April 10 last year to visit Flanagan with their child.

The package had been dropped off through her letterbox in the days prior to the incident.

Maskery said she didn't know that the package contained drugs, a claim which a judge said he 'didn't accept'.

When at HMP Manchester, she hid the package in her bra.

After arriving in the visiting area, she pulled it out and passed it to Flanagan, using the child as a 'distraction', prosecutor Hunter Gray said.

Flanagan then put the package down the front of his trousers.

They were spotted by officers operating CCTV cameras, and were taken away.

The package was found to contain 29 sheets of A4 paper, which had the class B drug Spice laced onto them.

Maskery said she was 'emotionally mixed up' and wanted to 'appease' Flanagan.

Flanagan said that he was also being pressurised by others to smuggle the drugs into jail.

Flanagan received a 'threat to life' warning from the police in 2011, the court heard, and has been attacked on two separate occasions in Strangeways.

Maskery said Flanagan believed that if he didn't get hold of the drugs, he 'would be harmed by violent criminals', in a basis of plea document heard in court.

She admitted hiding the package in her bra, and using her child as a distraction.

Flanagan, who has 27 previous convictions, is already serving a five year prison term for conspiracy to supply cocaine and heroin.

Maskery has no previous convictions.

Defending Maskery, David Temkin said it was an 'extraordinary case', and asked for his client to be spared jail.

He said references submitted to the court spoke 'incredibly high of her', and claimed any prison sentence would harm those around her.

Judge Smith jailed Flanagan for 20 months, which will run consecutively to his current five year sentence.

But the judge spared Maskery jail, instead handing down an 18 week sentence, suspended for 18 months.