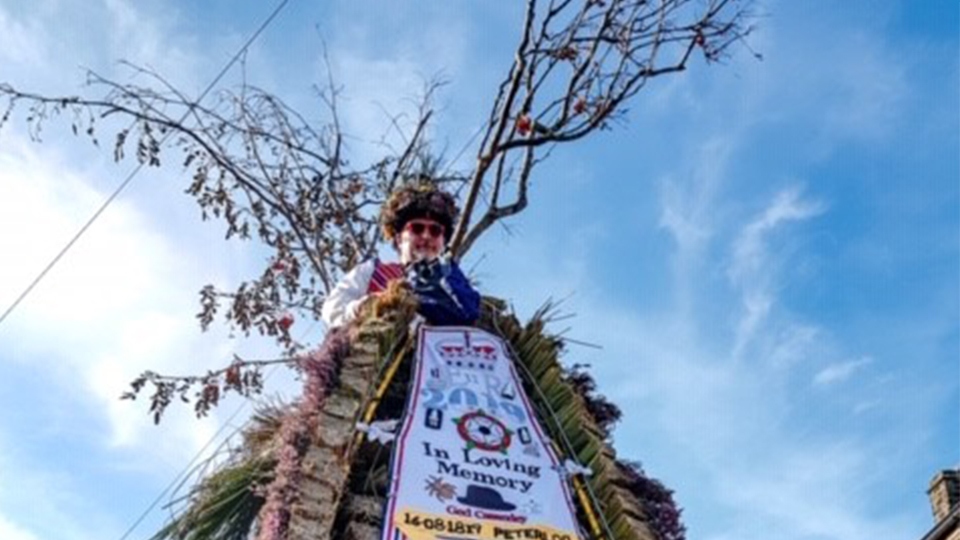 THE hugely popular Saddleworth Rushcart spectacle was tinged with poignant reminders this year by the man who took centre stage.

Carl Taylor, a member of Saddleworth’s famous Morris Men for ten years, was this year’s ‘jockey’  travelling the villages perched more than 13 foot up on a swaying tower of freshly-cut rushes, hauled on a colourful two tonne cart by the morris team.

And his elevated status meant he could display his own specially-made banner on the cart.

He said: “ I was nervous unveiling the banner and hoping people would like the sentiment after working on it for several months.

“This nervousness is justified when you walk into the St Chads  church Uppermill for our special service and see the weight of history on display. The banners all together are like a living history book.”

Carl had titled his banner "In Loving Memory” and it featured a tribute to  Ged Casserley  a much loved villager who died suddenly last year.

“Ged was famed for his close magic illusions last spoke to me last Rushcart just before he died, and he was more excited than me about my Rushcart,  so my tribute was easy,” Carl explained.

“A spider, Ged’s famous hat and  one of his card tricks that he had wrote on as the punch line that he would force you to choose, 'you owe me a pint'.”

Carl added:“The  main mosaic  - the Manchester worker bee - linked it all. Ged was a Manchester lad, the working bee coming from the industrial Manchester of 200 years ago and the Arena.” 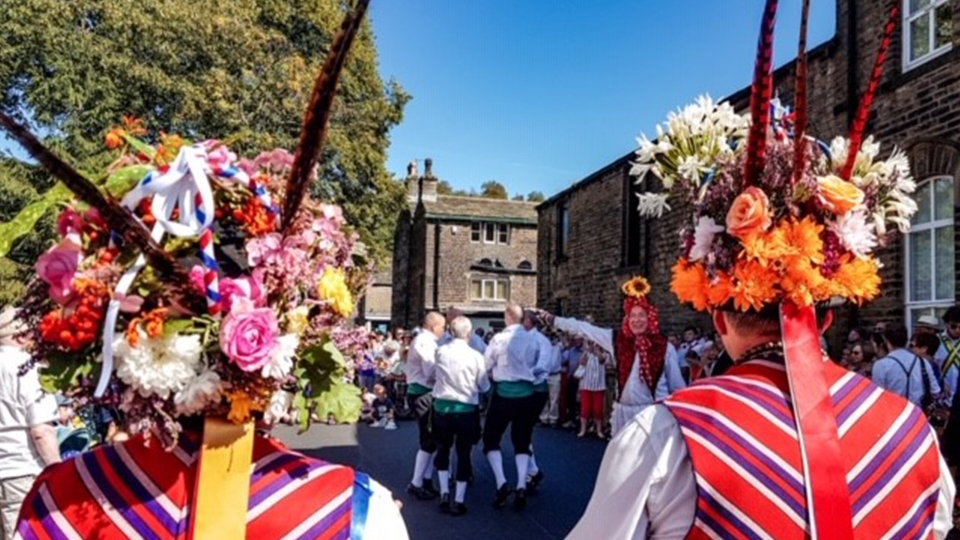 On Saturday, hundreds of villagers turned out in bright sunshine as the morris cavalcade danced its way from Uppermill to Greenfield, Delph and Dobcross before returning to Uppermill.

And on Sunday, after the service at Saddleworth parish church when rushes are scattered on the floor, the dancing and entertainment continued with a gurning competition, wrestling  a bad singing contest.

David Biggs, squire of the Saddleworth Morris Men, said: “Seventeen sides and supporters from across the country joined the  celebration of  our 45th  Saddleworth Rushcart and represented  their own particular style of dance.

“Carl’s banner was fantastic and also gave a nod to John Drake,  ‘fool’ of Waddard Morris Men and long time supporter and friend of Saddleworth Rushcart, who died this year.

“The material for his famous tweed suite  was woven at the Saddleworth museum in Uppermill and has been returned there for display.

“I would like to thank the people of Saddleworth for their support and understanding which allows us to keep this great tradition going and look forward to next year where it will fall the week before the bank holiday weekend.”