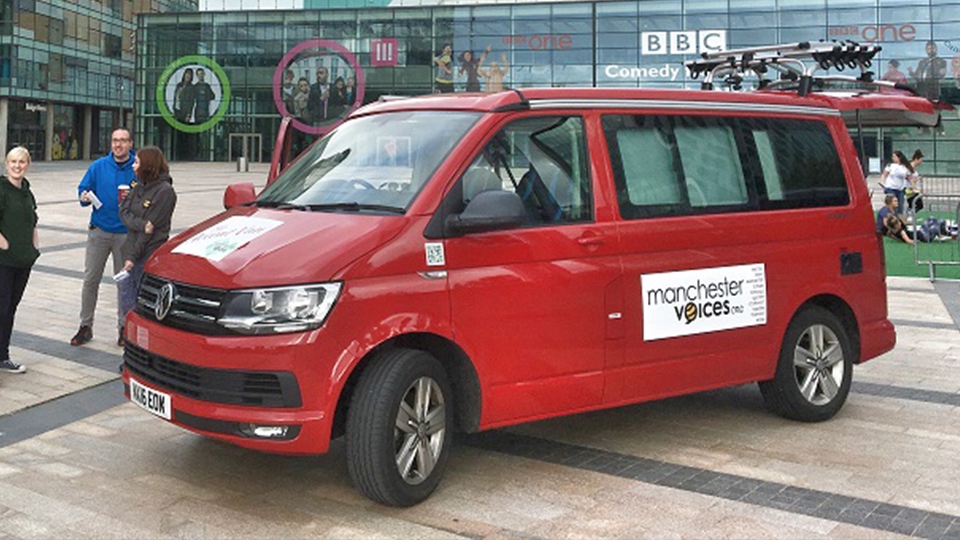 The Van used to collect data for the project

An interactive online map has been launched for Greater Manchester residents to plot the geographic boundaries of their own accents and dialects.

It is the next phase of Manchester Voices, the most detailed ever research study of its type, culminating in a permanent public resource celebrating the region’s rich tapestry of voices.

Sociolinguists from Manchester Metropolitan University are investigating where certain accents and dialects are spoken, people’s perceptions of how they and others speak, and how this contributes to civic and cultural belonging.

The Manchester Voices Map, launched this week, is seeking at least 500 contributions from people across the region.

On an online map of the ten boroughs of Greater Manchester, participants will be asked to draw an outline around areas where they think certain dialects are spoken, to name the dialects, and to give examples of their linguistic features, such as words used or the way they are said.

Whether you eat a ‘barmcake’ or ‘muffin’, how you pronounce words such as ‘book’, ‘nurse’, ‘boat’, and even ‘Bury’, or how likely you are to describe yourself as ‘skriking’ or having ‘cruckled’ will be clearly mapped out depending on whether you live in, for instance, Bolton, Oldham or Stockport.

People will also be asked for their views on these differences, for example where in the region people are felt to have stronger accents, or even where they sound more friendly or more Mancunian.

This data will allow researchers Dr Rob Drummond and Dr Erin Carrie to build detailed maps showing dialect areas of Greater Manchester, and delve into the characteristics their speakers are thought to have.

Next year, they will travel the region in their Accent Van, a specially kitted-out vehicle that serves as a mobile interview booth and recording studio, asking people in person about the way they speak.

Dr Carrie, Senior Lecturer in Linguistics at Manchester Metropolitan, said: “The Manchester Voices project is about, with, and for the people of Greater Manchester, which makes it essential that we hear from residents in the region directly about how they speak and who they are.

“Using the techniques we’re developing at Manchester Metropolitan University, we’re able to explore the social meanings of accents and dialects within and across the region and this helps us to better understand the links between language, place and identity.”

Dr Rob Drummond, Reader in Linguistics, said: “Our job as researchers is to celebrate these accents and dialects and to challenge any stereotypes associated with them; in doing so, we aim to promote linguistic equality and diversity and to nurture social and regional pride.”

“It is important that the project hears from residents of Greater Manchester from all backgrounds and of all ages so that we can get a more complete picture of the region’s linguistic landscape.”

The overall project, funded by the Arts and Humanities Research Council, will culminate with a permanent Manchester Central Library installation and archive, and a public resource which will be stored in the new Manchester Poetry Library, opening at Manchester Metropolitan in 2020.

The results will provide the most detailed linguistic and attitudinal description the region has ever seen, while simultaneously celebrating diversity through language in a variety of artistic forms.