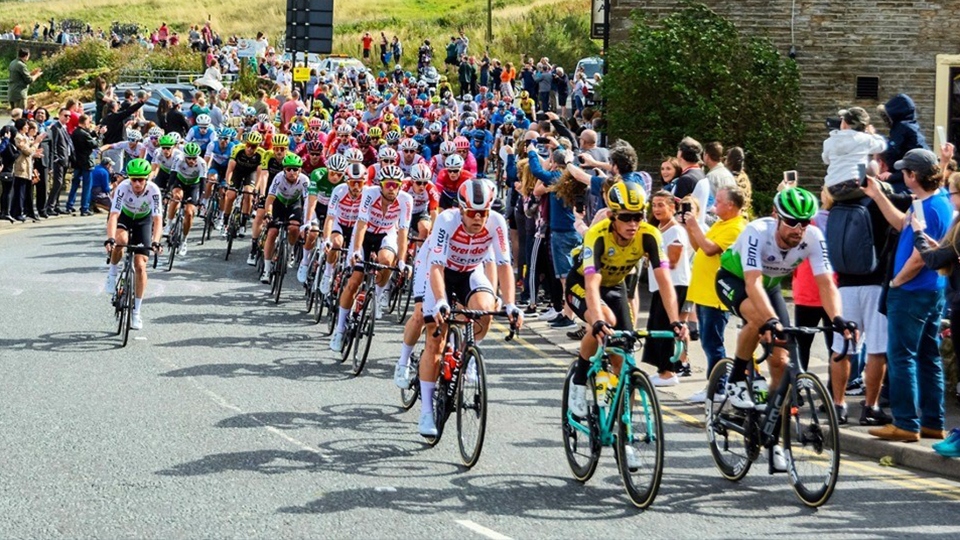 The racers arrive at Grains Bar (pic from Twitter)

Oldham’s Trojan mayor was on the front line leading the applause when the Tour of Britain cycle race came  to town.

Councillor Ginny Alexander joined scores of well wishers at the roadside at Little Owl Farm, Grains Bar, as the convoy of cyclists sped past at the culmination of gruelling climb from Delph village.

It was a key point on for one local cyclist Matt Wallsey whose family and friends tuned out in force to cheer him on from a specially erected roadside gazebo.

He had claimed a second on one of the races in earlier stages on the Wirral.

The party were headed his proud parents,  Larry and Lorraine, who said, “He’s a great rider and we are delighted he’s come back to his own town for the race .”

Councillor Alexander said, “The race was spectacular - a once in a lifetime memory. I was really proud it came to Oldham it was a truly marvellous event for everyone.”

Hundreds of well wishers thronged the route across the community which saw riders come into Oldham and Saddleworth from Tameside-before then heading out to Rochdale.

They took to the air in a novel bid to support riders on stage 8 of the Tour of Britain.

And their giant piece of “land art” showing the race’s distinctive bicycle logo was a marker for any drone or helicopter tracking the race route.

Cindy said, "We were amazed at the hundreds who turned out to watch the race, it was a marvellous atmosphere which everyone shared in our cafe.”