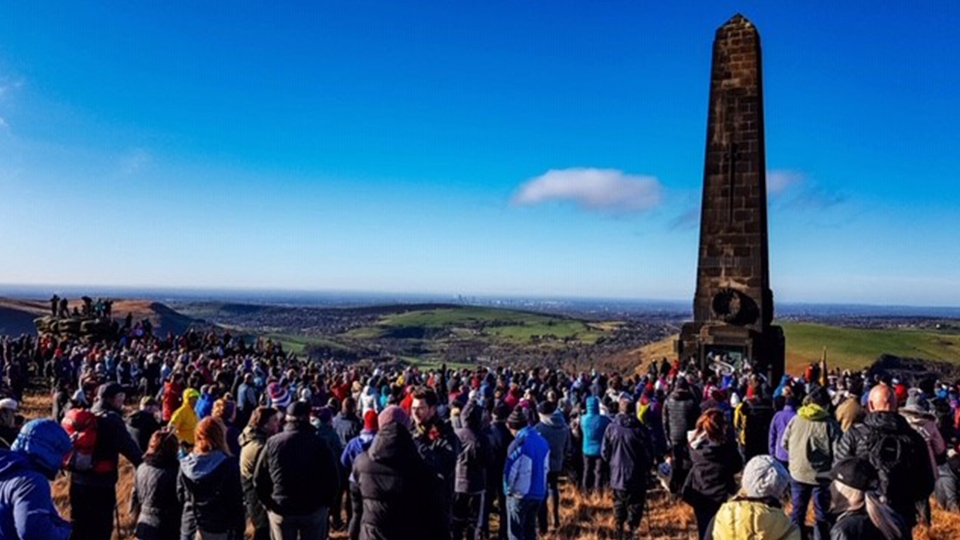 OVER moorland polished by bright sunshine, they came in their hundreds to pay tribute at one of Britain’s most unique memorials to those lost in conflict.

Here, at Pots and Pans on hills above Saddleworth,  they gathered to share memories of, family, loved ones and  friends  who were never return to share these stunningly dramatic vistas.

They sang hymns together and listened as Rev Aaron Jackman, assistant curate for the Saddleworth Team, quoted “no greater love has a man then to lay down one’s life for a friend.”

In a moving sermon the minister went on: “ These were the words spoken thousands of years ago by Jesus to his beloved disciples as he prepared to depart from them - as he himself prepared to lay down his life for his friends.

“It seems to me Jesus, more than anyone else who has ever lived, realised the true nature and power of compassion.

“It seems to me  Jesus knew the only way to transform the ugliness in the world into something beautiful, the only way humanity could heal its own brokenness and give itself a lease of new life was through the act of putting others before oneself.

“And so he modelled that truth by his death on the cross. A  true act of compassion.

“If we fast forward to the beginning of the 20th century, to the First World War, and again, we see that truth being modelled - not this time by a single individual - but by tens of millions of men, women and children as they put the needs of their families, their friends, their nation before themselves; many of whom willingly gave their lives in battle.

“And so in 2019 - a year marked by division, uncertainty and fear, where nations have been torn apart and families forced to flee their homes because of war and violence - may we be willing to learn from those who have gone before us.

“May we be prepared to put others before ourselves,  to fight for the sanctity of all life, no matter whose life it is; and may Christ, whose life and death showed us what true compassion looks like, breathe new life into your hearts and the hearts of all those you meet this year.” 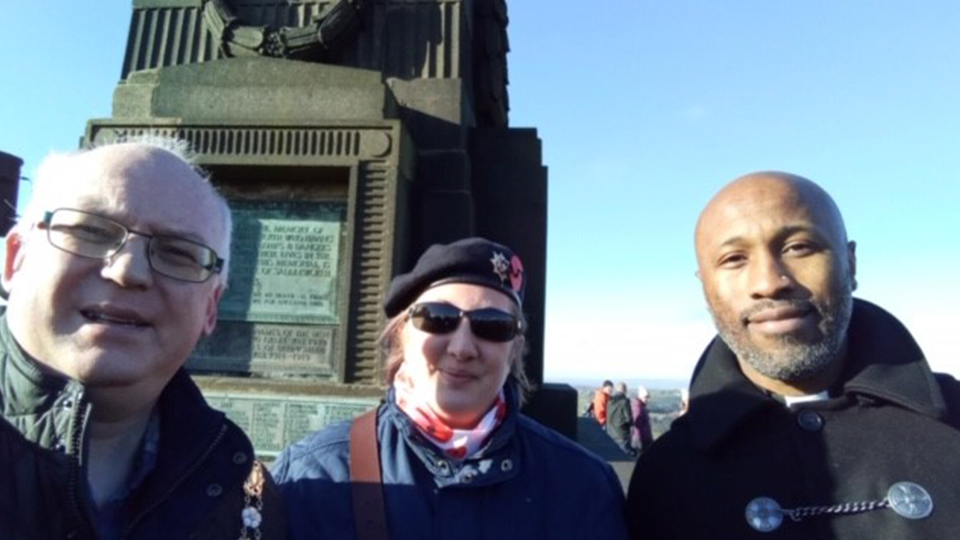 And Alison Clowes,  the Royal British Legion standard bearer,   returned to the hills  after from representing Saddleworth at the televised service of remembrance at London’s  Royal Albert Hall attended The Queen and Royal family on Saturday night.

Meantime, a moving act of Remembrance was held at Holy Trinity, Dobcross.

Led by Canon Sharon Jones and Mr Graham McGuffie, the village gathered with Dobcross Youth Band where a prayer of dedication  was read  at the newly installed Silent Soldier memorial.

And at a service in the church Canon Jones spoke of war as ‘unspeakable’ and paid tribute to all whose memories are scarred by events they cannot forget and about which they cannot speak.

She added: “Those  memories cannot heal and whose invisible scars do not go away.”

In Austerlands, a crowd of around 200 paid tributes at Saddleworth’s oldest war memorial.

The Service was conducted by Roger Fielding with Rev Sally Robinson from St. John The Baptist Hey reading the prayer.

The Last Post was sounded by local girl Vicky Prescott and proceedings closed with extracts from a 1915 poem, written by Saddleworth poet Ammon Wrigley, entitled ‘ The Lads of Austerlands and Scouthead’  read by Mrs Susan Smith.

Event organiser David Needham said: “From an informal gathering of a handful of people started in 1979, popularity of the event has grown significantly over the last few years.

“We were more than pleased with the large turnout which justified the Heywood Lane road closure. We are grateful to the Scouthead & Austerlands Community Group for providing the marshals for crowd control and traffic management.

“It is unfortunate that Derek Heffernan’s  illness prevented his attendance as I am sure he would have welcomed the involvement of a representative from the village’s parish church for the first time in living memory. Rev Sally’s appearance was certainly appreciated by everyone on the day.

“Plans are now underway for 2020 as this will mark the centenary of the Austerlands & District war memorial, which was officially unveiled on Saturday the 7th August 1920.”