You are Here: Home » News » Main News » Election disillusionment on the streets of Oldham

Election disillusionment on the streets of Oldham 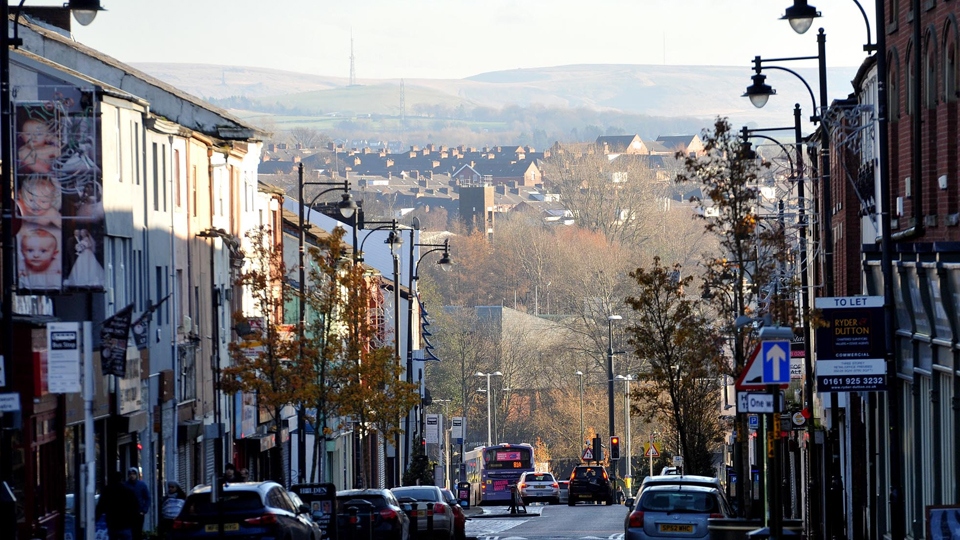 On the streets of Oldham and Saddleworth, there are signs all may not be rosy in one of Labour’s supposedly safe seats.

Over and over again the same frustrations are echoed by dozens of prospective voters, people fed up with politics after a year of chaos and indecision in Westminster.

“Guy Fawkes failed to blow up the Houses of Parliament in 1605, but they have done it themselves in 2019 without gunpowder,” is the blunt assessment of Delph resident Gillian Clark.

To gauge opinion here, you first have to work your way through those who refuse to be interviewed, those who explain they are simply ‘sick to death’ of politics.

When it comes to those who are going to turn out at the ballot box next Thursday, the watchwords on almost everybody’s lips are Brexit, and, oh, Jeremy Corbyn.

The largest constituency in Greater Manchester, Oldham East and Saddleworth is split across the urban terraces of Shaw and Moorside and the more affluent rural areas of Uppermill and Greenfield.

Nearly 60pc voted to leave the European Union in 2016 and most people haven’t changed their minds more than three years later.

Residents talk of losing faith in the political system, frustrated that the result of the referendum is yet to be implemented.

Stood waiting for his bus on Market Street in Shaw, Mark Andrews describes it as the ‘death of democracy’.

“I don’t think people trust politicians right the way from the parish council up to Westminster,” he says.

“Campaigners this week have been coming round knocking on doors. Everyone that I know who has had a knock on the door has sent them away.

“But I think at the moment a lot of it’s through social media, it’s the propaganda from all parties slagging each other off, confusing people even more.”

The 56-year-old is planning on voting either Conservative, or for the Brexit Party.

“I don’t know anybody my age or younger that wants to stay in the EU,” he says.

“So I think if it doesn’t go through this time there will be unrest.

“That’s what everybody is going to be voting towards, it’s not going to be a normal election.”

On paper the seat should be a safe bet for Labour come December 12.

Since its formation in 1997 when the boundary of the old Littleborough and Saddleworth seat was redrawn, Labour’s main challenge has been from the Liberal Democrats.

Incumbent Debbie Abrahams currently holds it with an 8,000 majority, and has been consistently re-elected with a bigger vote share since first taking office in a by-election in 2011.

But in the last two elections the Conservatives have ousted the Lib Dems to take second place, and increased their support from less than 5,000 votes in 2011 to 17,447 in the 2017 poll.

The Lib Dems still have a strong local presence in Shaw, where they hold all three of the ward’s seats on the borough council.

But on the town’s high street they hardly get a mention. Instead it’s the Conservative messages on Brexit and the NHS that seem to be getting through.

Even Labour’s spending pledges, including vows to renationalise the rail network and deliver free broadband, don’t seem to be swaying the voters we meet.

A former staunch Labour voter, Ann Edwards says it’s her desire to leave the EU that is making her switch her vote to support her former ideological opponents.

“I have voted Labour all my life but I am certainly not voting for them this time,” she says.

“We had the referendum, people said leave and Labour said they are not going to leave.

“If I don’t like the result of a general election can I ask for another vote?”

On Corbyn, the 71-year-old makes her feelings plain.

“He’s a ****head. Promising us free this and free that, nothing’s free, it’s all got to be paid for.

“It’s a waste of time giving you something free on one hand and taking something else away with the other.”

Down the road, 68-year-old Linda Shaw feels much the same and is preparing to cast a vote for the Tories over Brexit.

“I have voted Labour a lot of times but I am not a one party person,” she explains.
“I don’t like their policies, nationalise this, nationalise that, we’ll be bankrupt before we start and the country is important to me.”

Rebecca Burton, 24, says her family has warned her off voting for the Labour leader.

“I voted out for Brexit but your vote doesn’t matter anymore. Vote for what you want and they’ll still take over.”

Across the hills in Uppermill, Anthony Gothart is voting tactically for the Conservatives, despite coming from a Labour family, and with both parents trade unionists.

“I have never voted Conservative in my life. I normally vote Liberal Democrat, but the only thing I am doing is ‘out’,” he says.

On which leader he believes is best to run the country, the 67-year-old adds: “Jeremy Corbyn is far too left for me.

“I quite like Boris, he’s a bit like the British Trump. At least we can have fun on the road.

“Boris is sometimes a bit stupid and maybe that’s what we want.”

For others, Boris Johnson’s pledges on the NHS and policing have made a positive impression, if not his leadership skills.

Outside a Shaw charity shop, Janet Fletcher, a former healthcare assistant says: “I think Boris Johnson knows what he wants but I think he panics a bit when he’s talking.

“I think he’ll do well with saying ‘more police and hospitals’.”

Sitting on a wall along High Street in Uppermill village, Gillian Clark finds her political allegiances torn between her beliefs and – not the only person to say this – annoyance at internal politicking within the parties.

“I am basically Conservative but they have made such a mess of everything,” the 83-year-old says.

“We have a nice MP but she’s Labour so I can’t vote for her.

“The Tories are not standing together, I would like them to be more loyal and more unified.

“I like Boris. Everyone says that he lies but he seems very dynamic. Maybe that’s what we need.”

Shaw resident John, who has travelled on the tram down into Oldham Mumps, is less sure about where he will end up casting his vote come election day.

“I am not going to vote Conservative, because I don’t think they really care about people and the rich and poor here are getting further apart in my view,” he says.

“I don’t know what to say about Labour because Jeremy Corbyn doesn’t seem to be a particularly strong leader.
“I’m just disillusioned with the whole lot to be perfectly honest because you just feel that they are making promises that they can’t afford to keep.”

Uppermill resident Jean is contemplating a vote for the Liberal Democrats or the Green party, rather than Jeremy Corbyn or Boris Johnson.

“It’s really complicated this time. It’s frustrating because they are arguing about the NHS being sold to Trump. I don’t want it to happen.”

Jo Swinson may get Jean’s vote instead, although she hasn’t decided.

“I am thinking about voting Lib Dem, perhaps a woman might bring some common sense to it all. She seems genuine.

“Boris is a very well-educated clown.”

Further down the road in Uppermill, John Highton, 38, is in the same quandary over who he will cast his ballot for.

“I am a bit disenfranchised with the entire political system, there doesn’t seem to be a lot of truth in what’s being said,” he says.

The Dobcross dad wants to see a change in the political system to allow MPs to better represent their constituents, rather than obey their party whips.

“I find that party politics is like supporting a football team, you pick your club and you cheer them whether they are doing good or bad and you won’t accept that there is anyone else out there for you,” he says.

“Following the party line means you can’t follow your conscience.”

Despite the numbers of people turning their backs on the party over Brexit and its leader, Labour will still have its core supporters – and a new generation of Momentum-inspired young voters enthused by Corbyn’s policies.

Party member Joanna Brown, 24, says she is hopeful that a surge in young people signing up to vote will mean a boost for Labour.

“Brexit is a big thing but I am not that bothered about it,” she says.

“It’s things like the NHS and the living wage, the amount of poverty we have in this country – they are the things that need to be really talked about and I don’t think Brexit is going to be the thing to fix them all.”

Labour’s policies on raising the living wage and providing free childcare for young children also appeal to her and her friendship group.

And yet even she, as an enthusiastic Labour supporter, recognises the party’s leader may be a problem.

“But I know a lot of people who agree with all of Labour’s policies – but don’t want to vote for Jeremy Corbyn.”