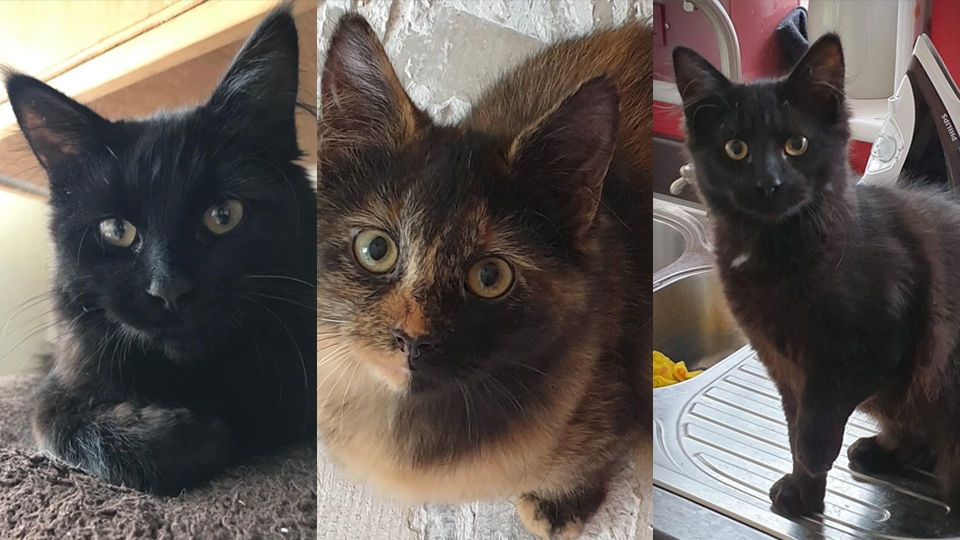 Kittens that were found dumped in a remote alleyway in Oldham will be spending this Christmas in a loving home.

The RSPCA was called to rescue two adult cats and eight kittens who were found in a cardboard box just two days before Christmas.

Christmas will be very different for the kittens this year, as they will be spending in surrounded by a loving family in a warm home.

Kate Houghton was chatting with a volunteer from the RSPCA Altrincham branch when she found out about the kittens, who had been raised in foster care.

In a twist of fate she finalised the adoption of two of the kittens - Willow and Bebe - on March 30, Mother's Day.

Kate, who lives with her family in Knutsford, said: "When I found out about the kittens' backstory, I was shocked - who would leave a box of defenceless animals where they may never be found?

"I'm so grateful to the RSPCA and the foster carer who took the cats in and hand reared them, feeding them every few hours over Christmas.

"It's lovely to have even a small part to play in their recovery and I'm looking forward to giving them the Christmas they deserve this year.

"Both girls have embedded themselves into our family with ease. They are chatty, funny, affectionate and have quite different but equally endearing personalities.

"Willow is very cuddly and will throw herself at your feet and race across the room the moment she sees you sit.

"Bebe is a little more restrained, coming for cuddles at her own choosing - but when she does choose, she is very insistent that it be here and now!

"Both are patient and unafraid of children. Willow, when she wants a fuss and you're not sitting ready for her, will wrap herself around your leg, hugging like a koala, which has taken guests by surprise on occasion!

"They are a source of endless pleasure and I am so grateful to the foster-carer who gave them the love and care they needed to be confident, unafraid and ready pets for a loving family."

Willow and Bebe's sibling, Thistle, was also adopted into a loving home by Celia Baxendale.

Celia, who also lives in Knutsford, said: "We adopted Thistle in March, he was the last kitten left of the litter so we just had to have him!

"I have two other cats and sadly had recently lost one at the age of 20, so we knew we really wanted another cat in the house and Thistle has just slotted right in.

"He is so fearless. He marches around the place and likes to be cuddled on his own terms, he is a champion hunter too and can catch flies and bees in his mouth.

"In the morning he will come and give you what I call Thistle kisses, where he sticks his face in your face, he is very loving in his own way.

"He's a real bundle of energy and such a character, I can't believe he had such a difficult start in life. It's so sad to think of him being left alone in the cold but this year we will be making up for that by making sure he is spoilt rotten over Christmas."

RSPCA inspector Lorna Campbell collected the kittens along with six of their siblings and two adult cats on Swinton Street at 1.40am on December 23.

"They were hidden in a secluded alleyway where they could never have been found had we not received an anonymous call.

"Although this was incredibly sad, I am so glad that this year they are getting the magical Christmas in a loving home that all animals deserve."

This winter, the RSPCA expects to take in more than 10,000 animals in need.

To help them deliver vital supplies to thousands of abused, neglected and abandoned animals left out in the cold this Christmas, visit www.rspca.org.uk/giftofkindness.