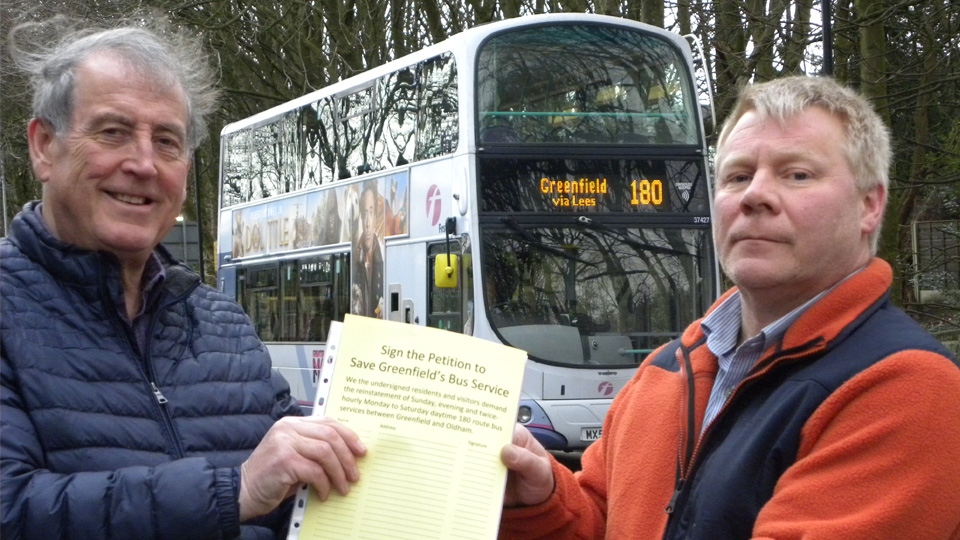 Well over 600 local residents have signed a public petition to 'Bring Back Our Buses'.

Organised by community campaigner Mick Scholes, the petition is demanding a return for the 180 bus route between Oldham and Greenfield.

The 180 route Buses Petition will be handed in this coming week to First Manchester Buses at their Oldham Depot Headquarters and to Transport for Greater Manchester.

Community Campaigner and local businessman Mick Scholes said: "I am delighted by the strong support of so many local people for this community campaign to reinstate Sunday, Evening and twice hourly Monday to Saturday daytime buses on the 180 route from Greenfield to Oldham.

"A special mention must go to local businesses and our local library, who have been fantastic in asking their customers to sign the petition.

"It's great when the Saddleworth community comes together to support each other.

"This has caused huge hardship to local residents especially to commuters and to many students needing to get to Oldham Sixth Form College, Oldham College and Blue Coat School in Oldham town centre."

Greenfield-based transport expert Richard Knowles said: "Transport for Greater Manchester claims it supports 'Sustainable Transport'. It needs to demonstrate this by negotiating with First Bus as a matter of urgency to reinstate Greenfield's 180 bus services, which serve Saddleworth's largest village by population.

"Visitors to the Peak District National Park at Dove Stone now face the ludicrous situation of no 180 bus services on Sundays.

"Not only will it force those who can to use their cars - making a bad parking problem worse - but those who rely on public transport will no longer be able to access the great Saddleworth outdoors at Greenfield and this will hurt the poor the elderly and the young the most."