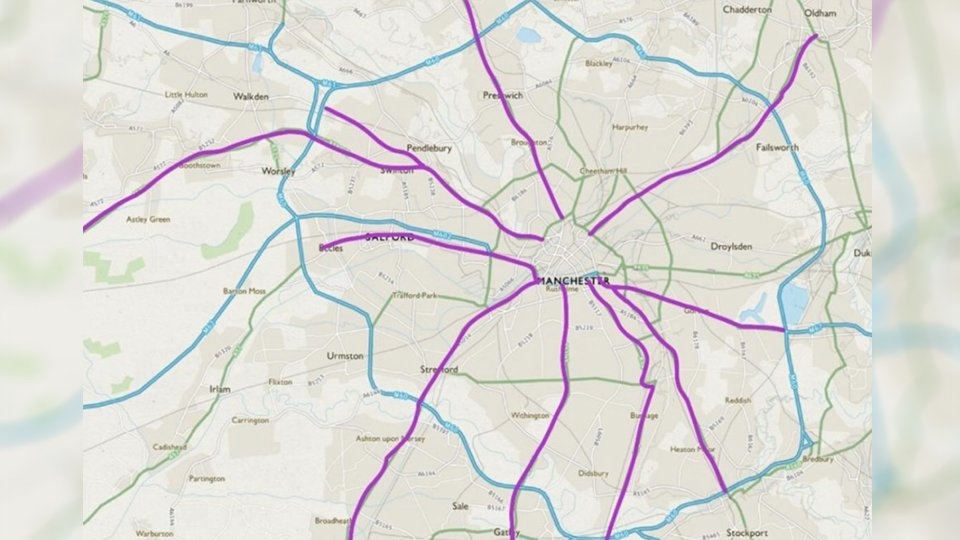 A huge network of pop-up bicycle lanes into Manchester city centre could be built to help commuters stay socially distanced and off public transport during the coronavirus pandemic.

Plans for a 116km radial route linking the M60 to the city’s inner ring road have been put before Greater Manchester leaders, with talks said to be ‘progressing rapidly’.

Local authorities have been urged by the government to provide more space for walking and cycling in response to the Covid-19 outbreak.

Since the lockdown came into force journeys by foot or bike now account for a third of all travel in Greater Manchester, with cycling up by 42pc.

Trafford council has already announced its intention to provide a seven-mile cycle lane from Altrincham to Manchester along the A56, one of the key commuter routes into the city.

But documents seen by the Local Democracy Reporting Service reveal proposals for nine other routes, including from the A6 in Stockport and the A6, A580 and A57 from Salford.

Routes along the A57 in Tameside, the A62 from Oldham and the A56 in Bury are also being considered by the respective local authorities.

The plans, which have not yet been finalised by all of the region’s leaders, have been welcomed by active travel groups such as Walk Ride Greater Manchester.

A spokesperson said: ‘’Without these measures it will be the least well-off who suffer the most.

“A third of residents do not own a car so without steps to help people cycle safely, the lowest paid – who are the least likely to own a car – will either be denied safe travel or forced to break distancing guidelines.

‘‘We need to provide these alternatives so people can make journeys safely, because we know that fear of road traffic is the main reason people choose not to cycle.

‘‘But at the same time this can also be a big step towards keeping hold of the quieter, less polluted streets we have seen during lockdown – nobody wants to go back to the bad old days of congestion and pollution, and these measures keep more cars off the road at a time when we know pollution also adds to long-term health issues and worse outcomes for those who contract Covid-19.”

The Greater Manchester combined authority says it is working with councils on the ‘potential implementation of major corridor routes’ – but a region-wide scheme has not been finalised.

Each local authority has received £500,000 to spend on temporary walking and cycling schemes, such as the pedestrianisation of Deansgate.

A further £16 million in emergency funding has also been allocated to the region by the government, something which has been welcomed by Greater Manchester’s walking and cycling commissioner Chris Boardman.

“By creating temporary space for people to cycle and walk along major ‘corridor’ routes local authorities can support those who want to do their bit to help save public transport for people who need it most,” he said.

“This will also ensure that the third of Greater Manchester households who don’t have access to a car are not denied the right to safe travel options.

“Currently options are being explored and councils are developing plans which we are supporting.

"However, a Greater Manchester- wide plan is not yet confirmed.”