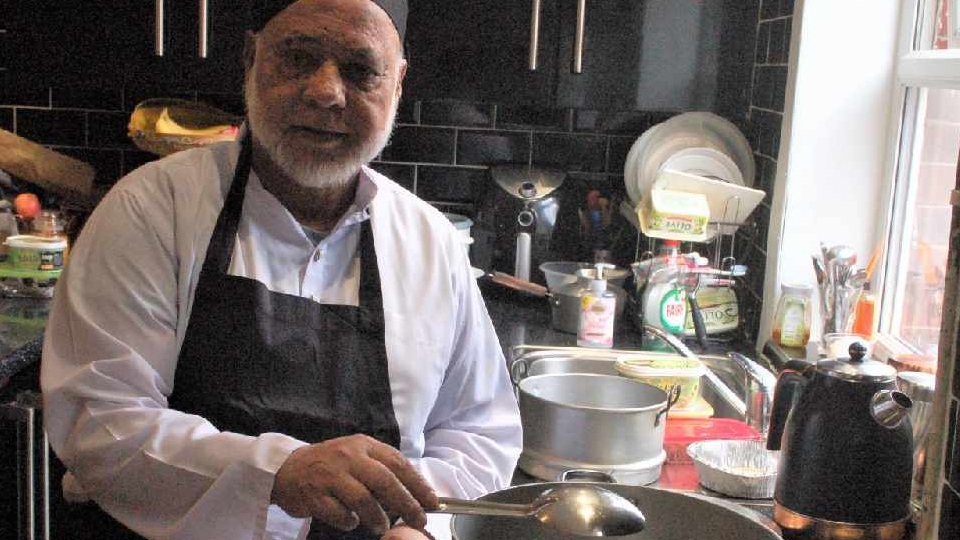 COVID-19 Hub staff at the Royal Oldham Hospital were amongst those to celebrate 72 years of the NHS with a culinary treat from the East – served up by a 72-year-old chef.

Organisers of the birthday bash were left in a bit of a flap when a shortage of staff meant they couldn’t serve over 300 medics and clinicians invited to a party.

But giving them a leg up was chicken curry expert Akkas Miah – who served them a mouth-watering menu from the Indian subcontinent to reward them for all of their hard work.

Akkas was a cookery expert when he worked at family restaurants in Blackpool and Culcheth, before retiring six years ago.

In a masterclass of using ingredients, he created his delights from donations – left over from a foodbank.

“We had received such kindness from the people when we asked for food for the Oldham foodbank that we had plenty of leftovers,” said Mohammed Afruz Miah, who organised the meal on behalf of sports-health charity, Just Breathe.

“Some of those extra helpings will be given to the homeless, but we felt we also had to contribute something to the NHS.

"After they put their lives on the line to deal with coronavirus, it was the least we could do.”

One unexpected guest who thought the food was streets ahead was former Coronation Street star Shobna Gulati (Sunita in the show).

Shobna also starred as Anita in Dinnerladies – a comedy about a busy canteen.

She certainly knows her stuff and said: “How wonderful to see our community give back so generously to our hardworking to our fearless key workers in our local NHS.

"I want to celebrate too, the British Bangladeshi and Pakistani communities showing their humanity and altruism when they too are historically at the fringes of our society.”

Mohammed formed the fledgling campaign after experiencing health problems in his late 40’s which prompted him to lose four stone.

“I have been there, done that, and got the t-shirt,” said the Maths tutor who was diagnosed with cataracts and warned about his diet and inactivity by doctors.

"Now I want to pass that t-shirt on and inspire others.

"As you have seen by our meal, we love the NHS and our local hospital.

"But we all have a role to play in looking after ourselves and not being a burden to them.”

He added this special message to Muslims: “The prophet Mohammed PBUH said that if our belly was bigger than our chest, then we would not enter paradise.

"That should be an inspiration to us to just breathe and get fit.”

For more on information on Just Breathe, visit their Facebook page @JustBreatheStayActive