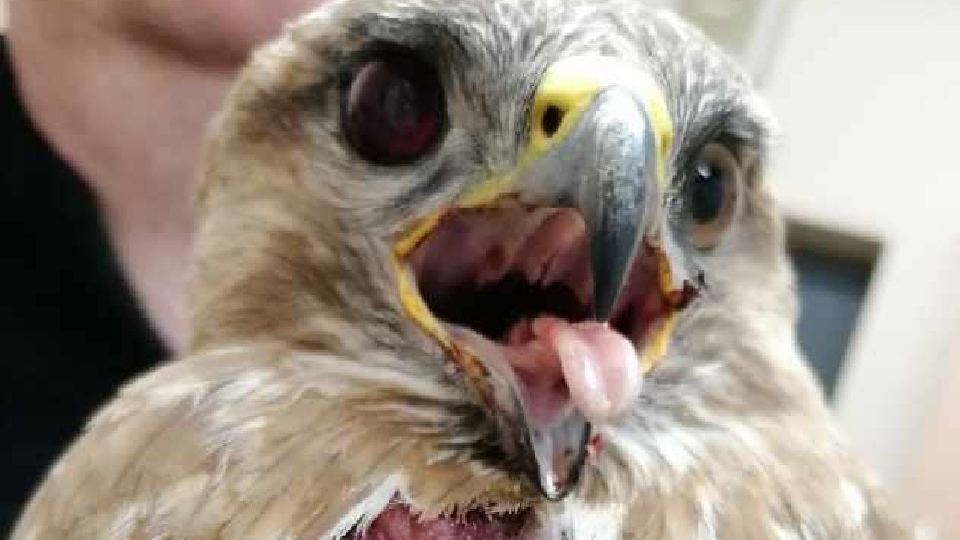 A member of the public found a buzzard dying on the ground in June, and contacted the RSPB

The Peak District National Park has been branded as one of the worse parts of the UK for illegal killings of rare birds of prey.

The claim is made in a damning report by the RSPB investigations team who say crimes identified at the the Dark Peak in recent months show “a continuation of a deplorable pattern” of the killings.

Jenny Shelton, from RSPB Investigations, said: “In May this year, a buzzard was found with fatal injuries on land managed for game bird shooting near Diggle.

“Incredibly, an x-ray revealed six pieces of shot in the bird's body from two separate events.

"It had been shot on two occasions, the second of which had ended its life.

"It is illegal to kill a bird of prey, yet the killing continues.”

Two years ago, a climber witnessed a red kite being shot out of the sky near Saddleworth, the same year a tawny owl and a short-eared owl were found shot near Wessenden Head.

The reports comes as the sudden appearance of a bearded vulture in the Peak District National Park has brought joy tinged with apprehension to birdwatchers and nature-lovers who have come to see the impressive raptor.

This is only the second time the species, usually found in southern Europe, has been seen in the UK, and is part of an international conservation initiative in the Alps.

However, a number of shooting, suspected poisoning and nest robbery incidents involving birds of prey in the Peak District National Park have come to light since lockdown, raising fears for the bird’s safety and bringing fresh focus to  ongoing problem with raptor persecution.

In the north of the National Park, the remains of a short-eared owl, an amber-listed species, were found on a grouse moor near Glossop on May 7.

A post-mortem recently concluded that shooting had been the cause of death.

No leads were forthcoming from police enquiries.

On May 11, a buzzard was found mortally wounded on land managed for gamebird shooting near Diggle.

It was found alive, but with terrible injuries and sadly had to be euthanized.

An x-ray revealed six pieces of shot lodged in the bird’s body.

In the south of the Park, a buzzard and two peregrines are being tested for poison after being found dead in Staffordshire.

All birds of prey are protected by the Wildlife and Countryside Act 1981.

To intentionally kill or injure one is a criminal offence, punishable by an unlimited fine or up to six months in jail.

“We join the RSPB in voicing our concerns for this bird and hope it avoids harm.

"It is clear from the catalogue of raptor persecution incidents from this spring alone that meaningful change is needed in the Peak District urgently.

“The sight of this spectacular bird gives a glimpse of the potential future the Park could have in hosting a range of species, including top predators, creating a healthy, balanced ecosystem where wildlife could flourish for the benefit of all.”

If you have information about any of these incidents, please get in touch with the police on 101 or call the RSPB’s confidential hotline on 0300 999 0101.

If you find a wild bird of prey which you suspect has been illegally killed, contact RSPB Investigations on 01767 680551, or fill in the online form here