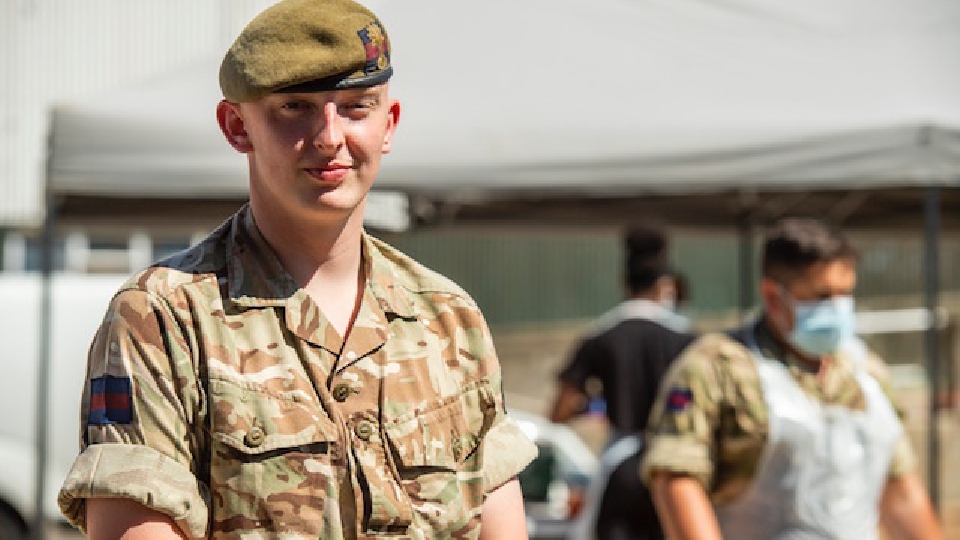 As military work on the National Testing Programme is being handed over to civilian contractors in England in line with the Department for Health and Social Care long-term plan to deliver coronavirus tests, Guardsman Charley Stott (aged 22), who is originally from Oldham and currently lives in Weston-super-Mare, has looked back on his experiences on the frontline of the coronavirus crisis.

Since April, the world-renowned UK Armed Forces have deployed thousands of personnel at short notice to support coronavirus testing.

They have worked alongside NHS staff and civilians at regional sites around the country and in Mobile Testing Units, helping to deliver more than six million tests.

The Welsh Guards has been involved from the start together with their comrades in the Grenadier Guards.

Members of the battalion worked alongside partners from Boots and Deloitte and learned how to deliver testing before training teams of military testers that deployed across London first at regional testing sites in Wembley and Chessington and then in the widespread pop-up mobile testing role.

They were later joined by testing teams from the Household Cavalry Mounted Regiment and musicians from the Bands of the Household Division providing testing in every borough in the capital and surrounding areas, including in closed communities and delivering test kits to care homes.

The Mobile Testing Units are playing a vital role in helping essential workers, who are most vulnerable to the virus, access tests.

The units were designed by military engineers in just seven days, with the first unit on the road and performing tests just hours after it was assembled.

Since the programme began, more than 2,500 service personnel have run 218 mobile testing units, conducting 600,000 tests around the country.

In recent weeks the Armed Forces have been training civilian contractors to continue this essential role.

Guardsman Stott joined the Welsh Guards in 2015 training as a specialist in the machine gun platoon, where he has spent his Army career to date.

He has deployed on exercises to Kenya and the Falklands.

In 2018 he deployed to Afghanistan as a dismounted infantry soldier, termed a “Guardian Angel” providing force protection in Kabul.

In addition, Guardsman Stott has also benefited from adventure training opportunities from the Army, which has seen him learn to ski in Austria.

Talking about his role in mobile testing, Charley said: “Prior to mobile testing we were on a training exercise designed to get us current and competent on the general purpose machine gun, a specialist support weapons capability we have in the Welsh Guards.

"Assisting with mobile testing has been very different to our usual soldiering, but it has provided new experiences for us as well as an opportunity to help and reassure the public at this uncertain time."

Defence Secretary Ben Wallace said: “Thousands of our Armed Forces personnel - regular, reservists plus supporting civilians - stepped up to serve on the front line in the fight against coronavirus.

"The four-month mission of those on the national testing programme helped to carry out more than six million tests, with 218 military Mobile Testing teams deploying around the country as needed.

"This is an extraordinary effort. I want to say a huge thank you to our Armed Forces for doing what they do best and supporting the nation’s resilience in a time of crisis.”

In Northern Ireland, mobile testing units have been civilian operated from the outset.

The handover process has now begun in England, Scotland and Wales.

The Guards will now return to normal military duties, training for future contingencies and fulfilling their ceremonial commitments as the Queen’s Guard at the Royal Palaces.