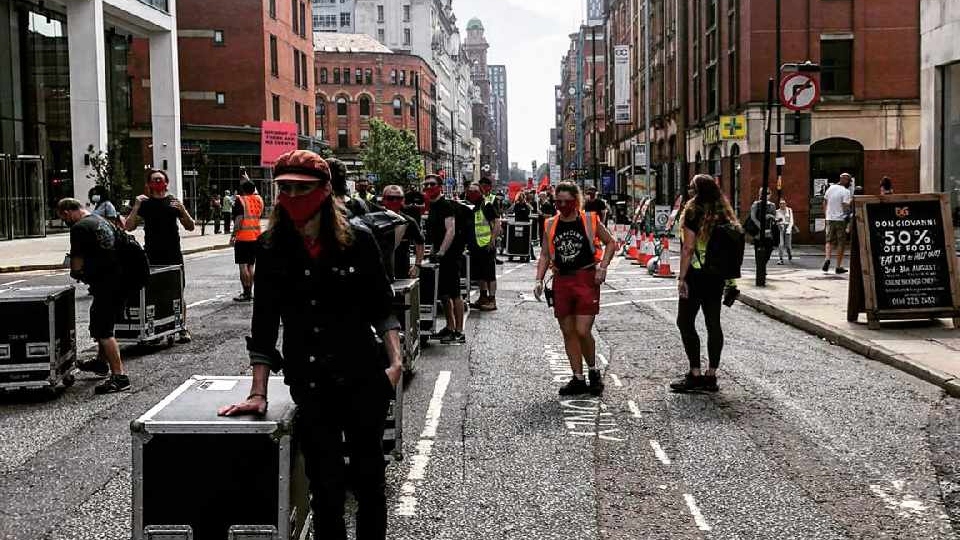 Oldham indie band Dirty Laces supported yesterday's march which saw freelancers pushing empty flight cases in front of them as they made their way silently from Manchester Academy - home of many a memorable gig for live music lovers of all ages - along Oxford Road, to St Peter's Square

Manchester's iconic Central Library, a building that dominates the city's St Peter's Square, was lit up red last night (Tuesday) in support of the thousands of freelancers nationally who work in the live event industry.

The move was to show solidarity with all the freelancers in Manchester and far beyond who haven't been able to work since the whole country went into lockdown back in March.

It followed a march through the city centre by hundreds of local freelancers who work in live events.

The march, which used the social media hashtag #WeMakeEvents, saw freelancers pushing empty flight cases in front of them as they made their way silently from Manchester Academy - home of many a memorable gig for Mancunians of all ages - along Oxford Road, to St Peter's Square.

Councillor Luthfur Rahman, Manchester City Council's Executive Member for Culture, Leisure and Skills, joined the march to show his support for all freelancers locally and nationally who are fast approaching six months without any work, and whose backstage roles might not be very visible, but who are the backbone of every gig, festival, or event anyone has ever been to.

He said: "Manchester is known the world over as a city of music, of events, of festivals.

"A city where in normal times stars shine and memories are made at the best gigs, the best events, and the best festivals.

"And it's thanks to an army of freelancers - each one an expert in their field - that these gigs, these events and these festivals are the very best they can be, and these same freelancers who keep upping their game and keep us coming back for more.

"There's no way the events industry in Manchester or beyond is sustainable without them.

"And with live cultural events still off the menu and no sign of their immediate return, there's no way this massive pool of talented individuals can sustain themselves in the meantime without some help.

"Urgent intervention is needed and needed now at a national level to support them and protect their livelihoods, to make sure that this vital backbone of the live industry that makes it all possible, is still there and ready to get straight back down to business as soon as it is allowed to.

"Imagine a world without gigs, without big events, without festivals.