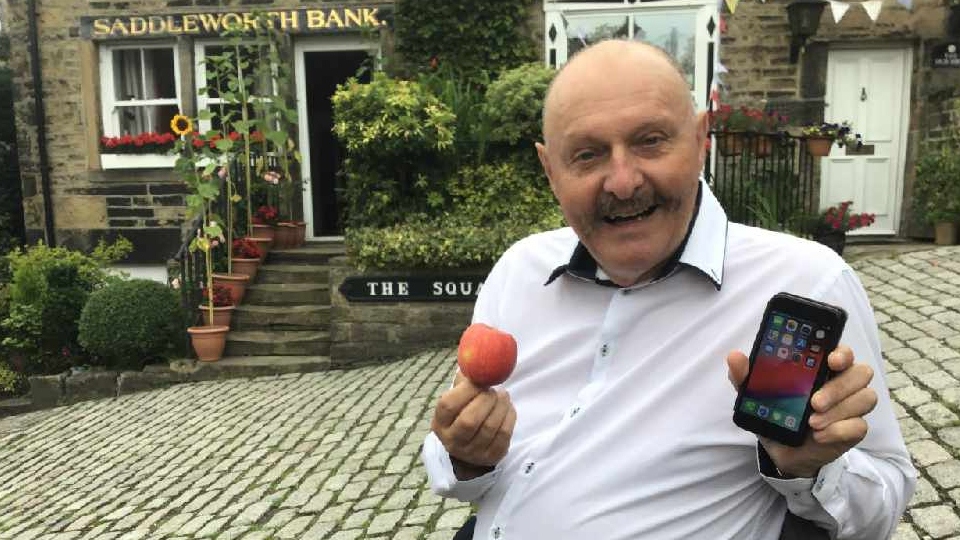 Smiling Dave Morris has taken a lucrative bite out of computer giant Apple by recording the theme for their new electronic device's worldwide advertising campaign.

The world champion whistler from Dobcross underpins the arrival of the much-hyped  iPhone 11 Pro with a compelling rendition of 'The Post Horn Galop'.

The distinctive ‘galop’ was a fashionable mid-18th century dance and today 'The Post Horn Galop', composed by Herman Koenig, a German-born cornet virtuoso, is still a popular novelty piece.

“It’s a real win to know the advertisement is travelling the world with me accompanying it," Dave said.

And he revealed the tune for the new ad was first used as the riveting backing track selected for a TV commercial he made heralding the launch of the BMW Mini.

That lead to an exciting extension to talented Dave’s extensive musical repertoire, taking him into the fast-paced world of marketing and TV advertising.

He recalls: “I genuinely had no idea the ad for the new mini would become so huge in such a relatively short time.

"I had people I've never met checking it online and complimenting me on my website."

In turn, this lead to him mixing with pop royalty as he was asked to perform on the soundtrack for the blockbuster movie Mama Mia! Here We Go Again.

He was more than pleasantly surprised to turn up to be met by Abba’s Benny Andersson, as well as the film’s musical director Anne Dudley (pictured above) who composed the famous TSB 'Henry’s Theme', which Dave performed in the TV commercial which has been running for six years.

“I had no idea which film it was until I arrived and was told that Benny Anderson of Abba was there overseeing the music production,” said Dave.