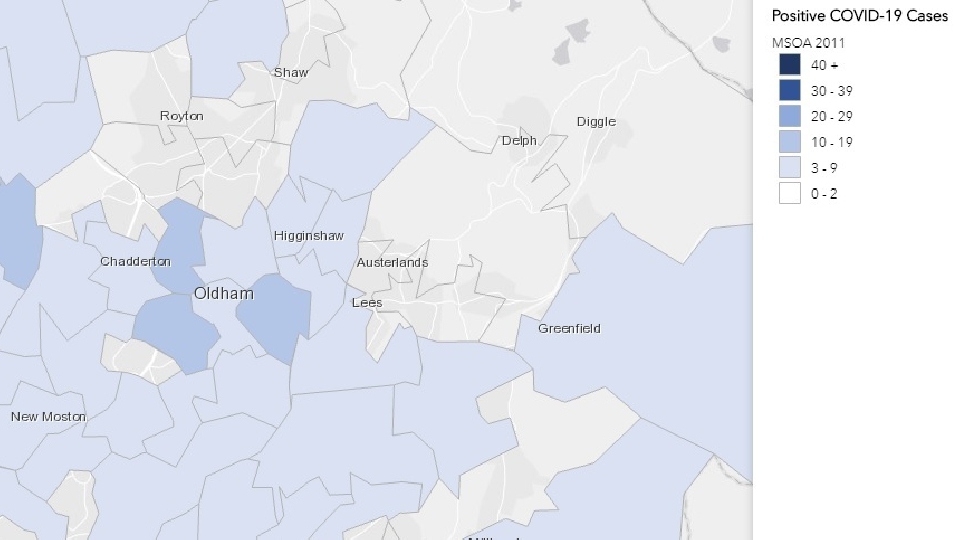 In the last seven days to August 29, there have been 134 new cases of Covid-19 confirmed in the borough, a slight decrease on the previous week of 143

Cases of coronavirus are continuing to plateau in Oldham, with the two largest hotspots recording steep falls.

In the last seven days to August 29, there have been 134 new cases of Covid-19 confirmed in the borough, a slight decrease on the previous week of 143.

According to the Greater Manchester Combined Authority, Oldham had an infection rate of 56.4 cases per 100,000 people for the same period.

This is a fall of almost half from the first week in August, where the rate was 109.7.

Throughout the total duration of the pandemic, Oldham has recorded 2,929 cases, the highest rate in Greater Manchester.

It continues to have the highest rate among the borough’s ten regions, and is still ‘significantly higher’ than the England rate of infection.

However, there are cautious signs that targeted intervention – including sending teams out on the ground to speak to residents in hardest hit areas – and door-to-door testing is starting to beat back the virus.

It had been feared that Oldham was on the edge of being plunged into a full Leicester-style lockdown, with its pubs, restaurants and non essential businesses forced to shut.

Council leader Sean Fielding said there had been a ‘noticeable behaviour change’ with more people wearing face coverings, and better compliance with restrictions in hospitality venues.

The amount of the population being tested has increased, but the proportion of people testing positive has fallen to 3.9pc, down from 4.7pc the previous week.

At a press conference this week, Sir Richard Leese, who leads on health for the combined authority questioned the level to which local measures imposed by government ‘are actually having any impact whatsoever’.

He said: “Delighted to see that Oldham’s figure continues to come down, but again we believe that’s rather more to do with the intensive targeted work that they’ve been doing in Oldham, rather than the fairly arbitrary borough-wide measures that have been imposed upon them.”

The region is going to ‘bump along’ in this kind of position – of cases rising then falling and plateauing – for quite some time until there is a cure or vaccine, he added.

Data from Public Health England (PHE) in the week to August 30 shows that new cases continue to be recorded across the borough.

However, two areas which had been outliers in terms of their staggeringly high numbers – Werneth and Alexandra Park – have seen a large decline from the peak of the August spike.

Busk, in the north west of the town, has overtaken Alexandra Park to claim second place with 12 new cases.

Oldham Town South has nine cases, while Moorside and Sholver and Holt Lane End and Bardsley both have eight cases,

Greenfield and Uppermill has seven cases, and Derker, Salem, Failsworth East and Waterhead all have six cases confirmed.

Failsworth West has the lowest number, with three new cases .

However, the PHE data map excludes areas which have two or fewer cases, meaning other areas may have also seen incidences of Covid-19.

There were no deaths registered in Oldham over the last week, down from three which occurred the previous seven days.

Meanwhile, a new walk-through coronavirus testing facility has opened at the Honeywell Centre in Oldham.

Anyone with symptoms can book or order a test at: nhs.uk/coronavirus